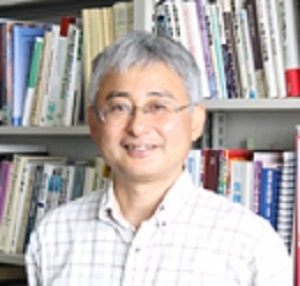 In this edition of Research NOW, we interviewed Professor Ryo Kobayashi of the Department of Mathematical and Life Sciences.

(2008 October 20th, Interviewed by the Public Relations Group, Office of the President)

Professor Kobayashi's area of specialization is Applied Mathematics, a field whose aim is the integration of math and other fields in research. His research is not to "prove" natural phenomena theorems; rather it is to make them natural phenomena clear using mathematical approaches. Recently however, a joint project* by with biologists and robot scientists robotics researchers has been launched to create a robot that, taking cues from living things, can move smoothly and fluidly like an actual living creature in a real world environment.

In an experiment conducted by Dr. Toshiyuki Nakagaki (Associate Professor at Hokkaido University) and his research group, a variety of true slime mold (Physarum plasmodium) was cut into 30 small pieces and placed in the spaces of a 3 cm square maze made of agar gelatin and a thin plastic sheet. The separate pieces made their way toward one another, as if driven by the will to be one whole entity again, and after 2 minutes, the slime mold had not only joined together as one, but had expanded its body to fill the entire maze. Next, oatmeal (slime mold's favorite food) was place at the entrance and exit of the maze. First, the slime mold withdrew from dead-ends in the maze, and while shrinking appendages which were not part of the most direct route to the food, formed a thick pipeline to the oatmeal pieces. After 8 hours, only the shortest route to the oatmeal remained.

"This type of situation presents a problem to the slime mold. There's food at each end, and thus they want to go to both ends, but they also want to stay together as one unit. If you look at it from the slime mold's perspective, their best option is to cover the food at both ends while remaining connected via the shortest possible route," explains Professor Kobayashi.

In other words, they were able to experimentally prove that this slime mold, which contains neither nerves nor brain, not only solved a maze, but looked for (and found) the shortest route possible to do so (published in 2000 in British science magazine, "Nature"). It is with this research at Associate Professor Nakagaki, Professor Kobayashi, and 4 others were honored as co-recipients of the Ig Nobel Award in Cognitive Science. 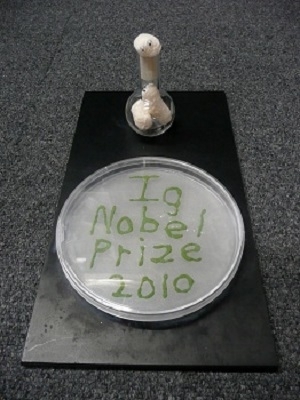 In an experiment to see how true slime mold would find the shortest route between 3 points or more (3 pieces of food or more), the slime mold connected itself so that even if one point became damaged, the whole was still connected, and accomplished this using the absolute shortest route. According to the professor, the slime mold model can be applied to civil engineering such as public transportation line, and water supply and sewage line planning and design. The routes and networks for train tracks and roads are not just important from an economic standpoint, but also from the standpoint of safety and accident prevention and it is hoped that it will be possible to use slime mold to compensate for the astronomical mathematical methods which become necessary as route systems become more and more complex. "Slime molds are simple and brilliant systems," says Professor Kobayashi, "which is why they have survived for several hundred million years. Thus, based on this, if humans ask the right questions, then they will provide us with the right answers. Slime molds are 'smarter' than you might think."

Finding the shortest route on a map of the US Interstate Highway System using the Physarum Solver.

Well-known humanoid robot "ASIMO" is equipped with technology to walk on two legs, however, the professor's research team is working toward a different kind of robot. Their dream is to create a new type of robot which can is robust to changes in environment and move as smoothly as actual living creatures. Robots like ASIMO are controlled through a center which can be likened to the brains in living creatures. On the contrary, it is known that when living creatures take steps, a neural circuit independent from the brain and located in the spinal cord called CPG (Central Pattern Generator) creates a walking rhythm. The spinal cord also governs instantaneous reactions.

Living beings are able to walk without the brain having to control every single complex aspect of the movement, and are able to react instantly to sudden obstacles they may meet. His research team aims to create the ideal robot, able to handle information on various levels, by learning about the mechanisms which control the movements of living things, extracting the essence of those mechanisms through mathematics, and then programming that essence into the robots. When one thinks about robots, often humanoid robots like Astro Boy come to mind, however, the first step for the professor and his team is to create a robot which imitates the simplest ameba amoeba, the Amoeba Robot. It seems that the joint research, which began when the Professor found a kindred spirit in Associate Professor Nakagaki during his time at Hokkaido University and continued with the addition of a new colleague, Professor Ishiguro, is steadily proceeding toward the creation of the ideal robot. 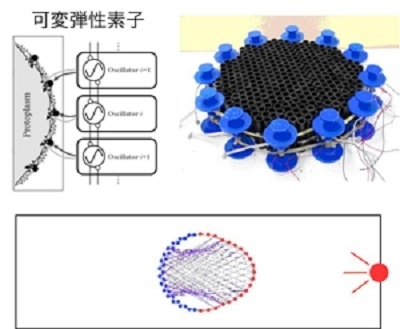 Professor Ishiguro (Tohoku University) and his research team's Amoeba Robot. It was built by connecting springs (variable elasticity elements) which are able to naturally change their length in real time. The lower image is a simulation of the Amoeba Robot moving toward the light on the right. The robot uses a control model derived from the slime mold mathematical model.

Always Have a Playful Heart

"Play hard, study hard!" This is the advice that the professor always gives his students, and the motto by which the professor lives. It also seems that he is fond of our university's motto, which is "Discover the Joy of Learning".

"If you don't have room to breathe, you can't do good research," says the professor, "I started a band as a hobby and play the guitar (electric guitar) to refresh my mind. If asked to play, we always gladly accept the chance. At an event during the Faculty of Science's Open Campus, we got to play at Satake Memorial Hall -- I was overjoyed!"

Winning the Ig Nobel Prize was also a source of encouragement for the professor's students, who dropped by during our interview. "It was real motivation for me. One day, I hope to top the professor's achievements," commented one student. Their eyes were full of hope for the future and I really got a sense of the open and relaxed atmosphere of the Department. 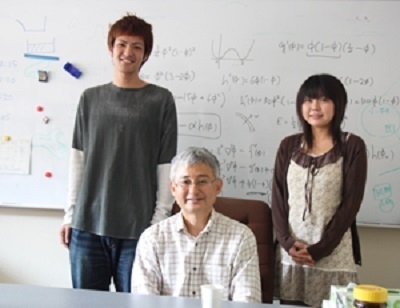 The Professor and his students

Professor Ryo Kobayashi of our Graduate School of Science wins the Ig Nobel Prize! News of the award came suddenly and I was left wonder, "but why did he win it for pension (nenkin)?" Later, I learned that it wasn't nenkin in the "pension" sense, but the organism nenkin, or slime mold, made famous by Kumagusu Minakata and Emperor Hirohito (or more recently, as seen as Hayao Miyazaki's "Nausicaa and the Valley of Wind"). I understood that the professor would be away at the award ceremony at Harvard University, so I sent a congratulatory e-mail to him in the meantime.

The Ig Nobel Prize is for research that "first makes people laugh, then makes them think," and last year, a female researcher, Ms. Mayu Yamamoto, became known for winning the Ig Nobel in Chemistry for her research on extracting vanilla flavoring from cow dung. When I looked into it, there are actually quite a few Japanese researchers who have been awarded this Prize. For example the creators of "Tamagotchi" (1997, Economics), "Bow-lingual" (2002, Peace), "Karaoke" (2004, Peace), and more have won awards for creating products which are quite familiar to us all. I had thought that we Japanese didn't have such a great sense of humor, but it seems the Japanese people have a rather unexpected link to humor.

At the very end of my timid and humble e-mail to the professor I made a very reserved request that I be allowed to interview him, and received a reply immediately upon his return to Japan accepting my request. "The school wouldn't fund my trip, but I went anyway. The atmosphere of the ceremony was fantastic! I had such a good time!" It seems that the professor really enjoyed his time at the award ceremony for "the award you can't win even if you try to" (with entertainment provided by Nobel Prize winners, the ceremony was more like a big school pageant, or so he said). All the excitement made for an active and interesting interview session. All that's left now is the Nobel Prize, right, Professor? (O) 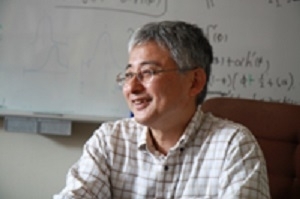 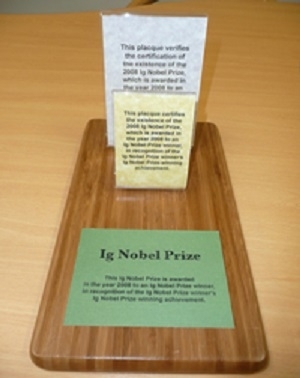 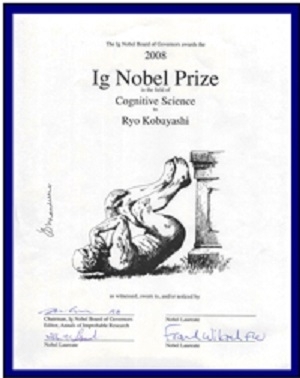