Architecture is the Creative Process Itself 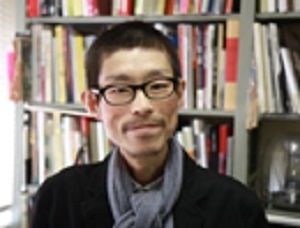 In this edition of Research NOW, we interviewed Associate Professor Shoichiro Sendai of the Department of Social and Environmental Engineering, the Graduate School of Engineering.

(2008 December 10th, Interviewed by the Public Relations Group, Office of the President)

Associate Professor Sendai's area of specialization is Architectural Design. Architectural Design is a field of study which looks at architectural designs and researches their methods of expression, such as architectural drawings, construction, landscaping, and urban spaces, and the historical developments behind them. The focus of his research is the architectural process of 20th century French architect, Le Corbusier. He also researches children's environments and cities which have experienced atomic bombings (atomic cities).

Seeking to Explain the Essence of Le Corbusier

* Le Corbusier (10/6/1887-8/27/1965): Architect primarily active in France. Hailed as one of the three great masters of modern architecture. An advocate of modernist architecture using reinforced concrete. 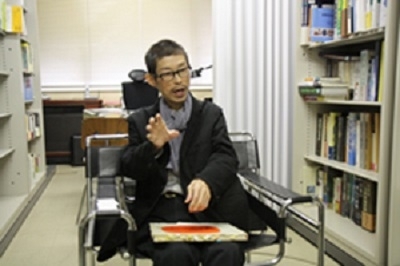 In his book of Le Corbusier designs, there are countless tags. Bought with the wages earned as a student working part-time in an architectural office, this one design book of many turned into research material. 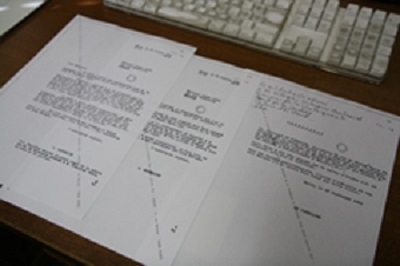 Copies of letters between Le Corbusier and his benefactors, gathered while studying abroad in France.

Winner of the Academic Award at the 3rd Western Art Promotion Foundation Awards. Planning an Exhibition Approaching the True Nature of Le Corbusier.

Associate Professor Sendai was put in charge of planning the exhibition "Le Corbusier: Art and Architecture - A Life of Creativity" held at the Mori Art Museum in Tokyo from May to September 2007. The exhibit introduced Le Corbusier's works through simulated experiences of full-scale recreations of his Paris atelier (studio), as well as his Marseille Unite d'Habitation ("Housing Unit"), a never-realized grandiose city plan, and more using computer graphics, large-scale models, and designs unveiled by Le Corbusier himself. By creating a place where visitors could experience for themselves the world of Le Corbusier's theory and creations, the professor approached the true nature of Le Corbusier.

The planning of the exhibition was evaluated and awarded the 3rd Western Art Promotion Foundation Academic Award (award ceremony held 11/26/08), and at the same time, the professor was awarded the 7th Hiroshima University Presidential Award 2008. 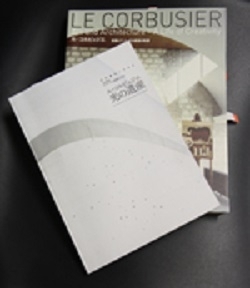 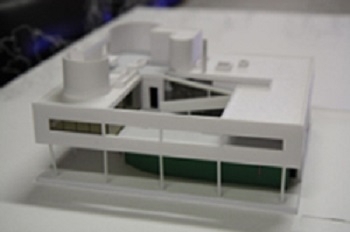 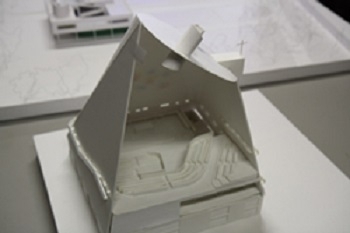 (Bottom) Model of the Church of Saint-Pierre, which Le Corbusier worked on during his last years of life; completed in 2006 long after his death. The design emphasizes molding.

"I'm more interested in the 'creator', who builds the buildings, rather than the actual completed buildings. Architecture can be found in the planning process. What the designer imagines is never what is actually built. The reason for this is that harmony between humans and the environment, harmony with the landscape, and the history, culture, and climate of the land are all tied into the design process. Architectural design is the human-born process of taking something outside of yourself and turning it into something inside of yourself," explains the professor.

In the words of Le Corbusier, "Architecture is spiritual construction". Here "spirit" is the French word espirit or the essence or heart. It means that the architect's way of life and what is inside of him comes out during the creation process. However, in his final years, he left these words, "There is nothing more difficult to communicate to than the human heart." Even as a genius and pioneer modern architect, one can still catch a glimpse of his struggles even now, which gives us insight into his thoughts on design. 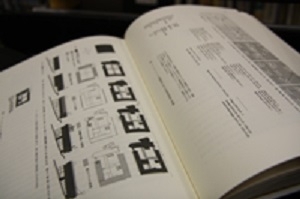 "The Religious Architecture of Le Corbusier and the Creation of 'Architectural Scenery'" by Associate Professor Sendai.

"Children's Environments" is another part of the professor's research theme. He is considering building child-centered cities using the sensibilities of children.

"I've walked with elementary school children in the city and chanced upon a factory. Most of the kids think they're dirty, loud, or dangerous, but among those, there are also children who say, 'If you put a building here, maybe the city would get better.' Seeing it with your own eyes, you look forward the actions the children are going take themselves. If you look at things through the eyes of a child, there are many things which you can discover, which become hints for city-building. I want to create a background for children to participate in city planning," says the professor.

The professor aims to support the proactive activities of children, and to make progress toward city planning which takes the sensibilities of children into consideration. 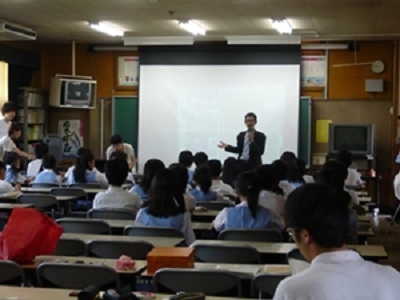 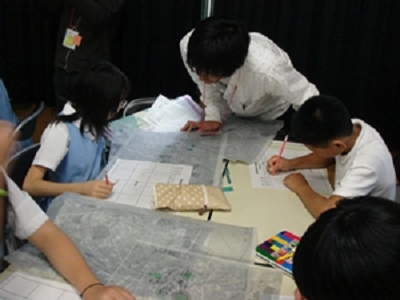 Environmental education for children. The professor looks forward to the proactive and central role that children will take.

Currently the professor is conducting interviews with survivors of the atomic bomb. "The interviews themselves are not easy - it makes me feel quite heavy-hearted at times. I've also had survivors shout their refusal to be interview into the phone at me. To interview the survivors is to touch the history that each individual has lived. Through the real histories connected to the lives of the survivors, I'm able to really think about what it means to live and what a place to live means," explains the professor. 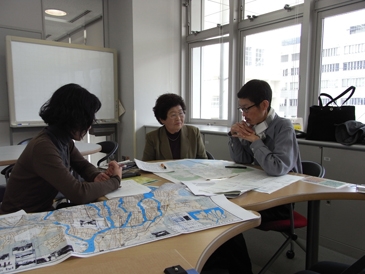 A photo taken during an interview with a survivor. Using maps, the professor and the survivor trace what the city of Hiroshima was like before and after the bombing.

During the interviews, Associate Professor Sendai asks the survivors for their impressions of Hiroshima before the bombing, and their impressions of the reconstructed Hiroshima. "During one interview," says the professor, "I met an elderly survivor who said, 'Every time I see the Rest House inside of Peace Park, I think to myself, Wow, it's a wonder I managed to survive. The Rest House gives me the strength to live.' What I realized through these interviews is that in order to live, you need to have a 'location' or 'place' which is lasting and continues on through the years and in that, real and temporal continuity is necessary."

"We live connected to the past. When I was thinking about what architecture can contribute to peace, of course there are things such as city planning as a means of disaster prevention or crime prevention, however, I think that it's building 'a city space where people can feel alive', which is the very root of humanity, and which will lead to peace-oriented city planning."

The Fundamentals of Architecture are Walking and Conversation.

In his own words, "To trace the history and architecture of Hiroshima, I walk around the city with students so that they really get a feel for the history of the location. Students need to talk with others and to communicate with nature in order to polish their own sensibilities. The architectural process is honed by knowing the land, knowing the history, and knowing the climate." 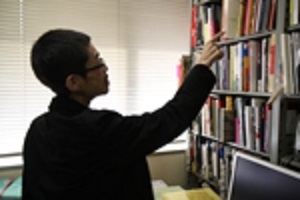 In his office, Associate Professor Sendai keeps all the pamphlets and catalogues from every museum and exhibition he has been to around the world in chronological order. He speaks of the importance of seeing things with your own eyes.

As such, Associate Professor Sendai's teaching method for students places importance on dialogue rather than on lecturing. "Students think that there is always a right answer somewhere when it comes to research. But with that line of thinking, when you don't get results, you get stuck. If there are swings and misses in research, then there must also be homeruns. Even I find that I can work things out better in my head if I talk with my students. I show students that I too learn by mistake, and I always interact with students in the same manner that I do anyone else," says the professor of his students.

"It is exceedingly difficult to do appealing research. But even so, I constantly aim for better quality research. If the quality of your research is good, then it will assuredly somewhere along the line be of help to others, and I think that also is connected to contribution to society. The only question is what exactly appealing and high quality research is," says the professor modestly. 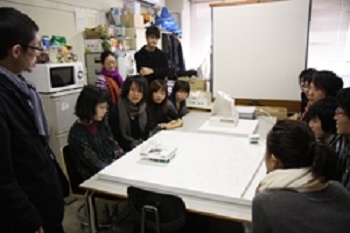 One of Associate Professor Sendai's seminars (scale model built by students - model was displayed at the Hiroshima Prefectural Art Museum).

Associate Professor Sendai emphasizes that the fundamental of architecture is to walk the location. He also says that cities are living things, and through nurturing the city, you can make it even better. It seems that in order to polish one's sensibilities and to get a sense that there is a reason why a certain building is in a certain location, fieldwork is essential.

The professor is also involved in the creation of the "Hiroshima Eco-Peace Map" as a quiet project. Creating the "Hiroshima Eco Peace Map" first begins with fieldwork. From elementary scholars to senior citizens, each generation is put in a respective group, and together they build a map using universal icons to describe the city as they see it from the streetcars of Hiroshima. The icons will be used to express the impressions and feelings received from the city itself.

In the city, "old" and "new" are connected. The "Hiroshima Eco Peace Map" is a Green Map that could only belong to Hiroshima, where the past and present are inseparable, and is created to hone spatial and temporal sensibilities. It is an environmental map to send out a new message of peace and a city design which connects the past to the present. It is scheduled to be updated in the near future. (W) 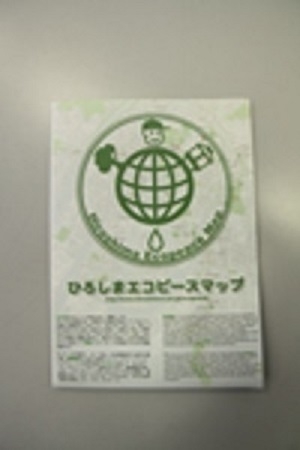 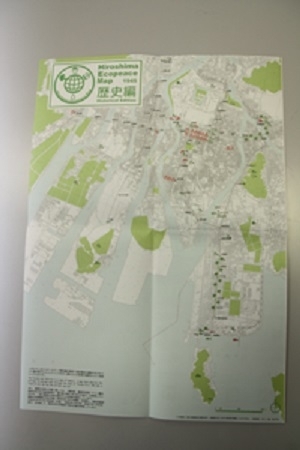 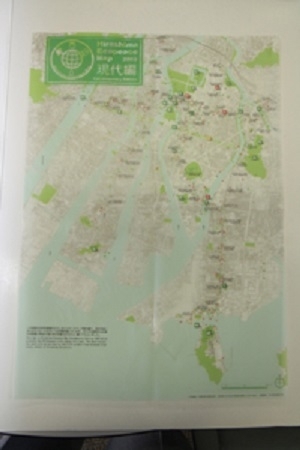