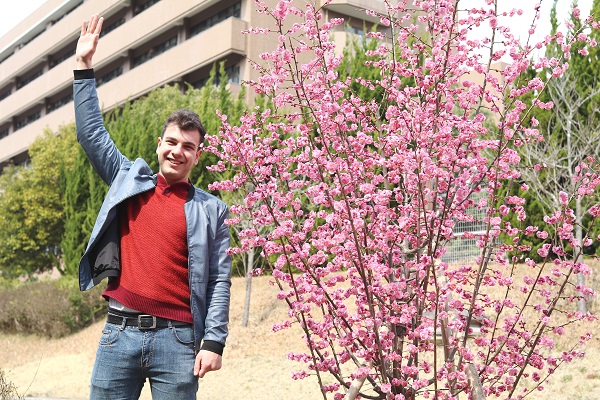 Past Voices from Abroad

First of all, tell us about your hometown.

I’m from Ganja, the second largest city in Azerbaijan. Ganja is a fascinating blend of history and modernity, or old and new, where the visitors can enjoy lots of places of scenic beauty.

For example, Lake Goygol. At the time the city of Ganja was established, in around the 5th century, this enormous lake was actually a river. People settled down on the banks of it and formed a town there. However, a huge earthquake struck that region around the 12th century, causing severe landslides, damming up the flow of the river. Then the river turned into a large lake. The town was completely damaged and people were forced to move to the east. And now, this lake attracts high numbers of foreign and local visitors with its seasonally changing view. 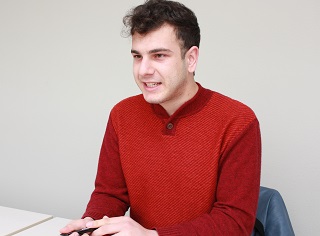 Then, we also have the “Bottle House of Ganja”. This house was literally built from many bottle glasses by the owner who actually lived in that unique structure. If you take a closer look, you can see how interesting the house is designed. I strongly recommend you to drop by when you visit my hometown.
Another tourist attraction is Nizami Ganjavi Mausoleum. It was built in honor of Nizami, a poet of great renown that Ganja boasts to the world. Some of his poems even appeared in the textbooks of my childhood.

Are there many Japanese people living in Azerbaijan?

No, not so many. From what I heard, there are only about 35 - 40 Japanese households throughout the country.

I see. By the way, why did you want to study abroad in Japan?

Because I like Japanese history and culture. I also like the way the Japanese people cherish their unique culture and tradition. Even today, we can see many Japanese people in traditional kimono walking down the street. It is a sight that cannot be seen in any other countries including Azerbaijan. In addition, I am interested in the history of samurai, Japanese warriors.

I admire Musashi Miyamoto, who devoted himself to master the essence of swordsmanship as well as the art of military strategy. Actually, I got to know about Musashi when I was studying Japanese haiku (Japanese traditional poem of seventeen syllables) from a book titled “Haiku teki seikatsu” (means “life with haiku”) written by Kai Hasegawa. I was deeply impressed by his extraordinary ability as a swordsman.

Did you study haiku in your home university?

Yes. I studied Japanese language and culture in my university located in Baku, the capital of Azerbaijan. Japanese literature, from classic to contemporary, was part of our curriculum. But unfortunately, not many Japanese books have been translated into Azerbaijani language, so we did not have many opportunities to read those books there. Therefore, I would like to read as many Japanese books as possible during my stay in Japan. Among them, what interests me most is the book titled “Go Rin no Sho (The Book of Five Rings)” written by Musashi Miyamoto. It seems like a difficult book, but I would like to give it a try.

I hope you will enjoy reading it. By the way, how did you get to know about Hiroshima University?

When I passed the selection to study in the Japanese Language and Culture Studies Program, I was given the opportunity to choose the university in Japan. It was then that I knew about Hiroshima University for the first time. There were so many options and I couldn’t decide which university to choose, but I finally decided on Hiroshima University because of its ideal environment being far from the bustle of the city. I thought I could concentrate on my study in the quiet city of Higashi-Hiroshima on weekdays, and enjoy myself in the lively city of Hiroshima on weekends (laughter).

Did you make Japanese friends?

What is your impression of the lectures?

I only take Japanese language lessons right now, and they are not so difficult for me. And so, I have time to learn about things outside the classroom. And the teachers are all so kind and friendly. Now, I only have foreigners in my class and I don’t have many opportunities to speak to Japanese people. I feel that the best way to improve my Japanese is to speak to Japanese people because if I speak only with foreigners, no one will correct me when I make a mistake. Therefore I am looking forward to the new semester where I can take lessons together with Japanese students. 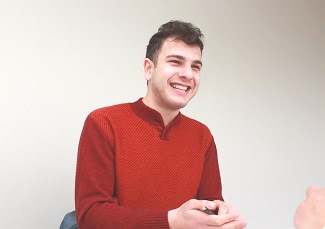 What kind of textbook did you use when you were studying Japanese in Azerbaijan?

The textbook I used was not like the English textbooks in the old days of Japan, which start with sentences like “This is a pen.” (laughter) In my book, we had a Japanese character called Yamada-san making a self-introduction. There were also other characters from America and other countries. But come to think of it now, the Japanese written in the textbook is somehow different from the language spoken by Japanese native speakers.

So, did you have any difficulties understanding the actual language?

Well, I did when I first came to Japan. But I have gotten used to it now. I can ask the person directly when I don’t understand them, or I can check the dictionary as well.

Did you learn any new words recently?

I learnt the word “Oshi!” I am in the university basketball club now. My teammates say this to the person who missed the hoop when trying to shoot. It actually comes from the word “Oshii” meaning “near-miss”, and we shorten it to “Oshi”.

What do you say when you shoot successfully?

“Yossya!” (laughter)
Another new word is “Tsumekae-you (shampoo refill)”. Well, actually I have never seen any refillable products in my home country. I remember feeling surprised when I first saw these things here in Japan. Apparently there used to be such things in Ganja during the Soviet years, but not anymore.

Before the interview, I asked you about your hobbies and you mentioned “Food”. Did you mean cooking or eating?

Both! I cook and I eat. I like doing both. I told you just now that Ganja is famous as the hometown of the poet Nizami Ganjavi. Well, actually it is also well-known for its delicious cuisine. The most famous one is Pakhlava, a very sweet pie made of nuts and walnuts. I have never tasted anything close to this in Japan. It is sweet, big and thick. We make this at home and usually cut them into the shape of diamonds. In Azerbaijan, we celebrate the spring festival called Novruz, and this Pakhlava is one representative food to be eaten on this festival. We also have Dovga (a soup made from plain yoghurt and vegetables) and Kulcha (a kind of sweet pastry).

Most people in Azerbaijan have sweet tooth?

Yes, people in my country like to eat sweet stuff with unsweetened tea. Lately, with the America-based coffee chain stores expanding business in Azerbaijan, many youngsters like to drink coffee too. But the traditional drink is still tea. You can see many adults playing games as they drink tea in the shops in my country. It is one of the favorite pastimes there.

What do you think of the tea in Japan?

Hmmm… I am sorry to say that the tea in Japan does not suit my taste buds. A few days after I came to Japan, I bought a bottle of tea but I couldn’t finish it. I guess Japan is best known for Japanese tea and the green tea I drank in Hiroshima is superb. 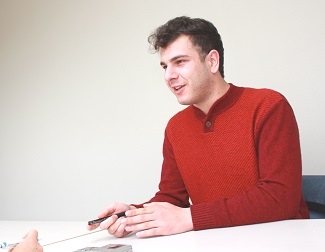 Did you encounter any difficulties after you came to Japan?

Well, it didn’t really bother me too much, but I find it difficult to form “real friendship” with Japanese people. When we are together, we can talk and laugh and have a good time. But after we part, only a small number of them will make the effort to keep in touch. In Azerbaijan, when we get to know a foreigner, we talk a lot and get closer to each other, we make plans to go somewhere or do something together, one after another. But I find it difficult to do so with Japanese people.

I kept wondering why and asked one of my Japanese friends about this. And he told me that Japanese people tend to build a “wall” around them and it is rare for them to allow others to cross the “wall”. According to him, that is the way Japanese people interact, and also their way of trying not to “bother” others. So I learnt one thing - in order to maintain a good relationship with Japanese people, it is important to build a wall and protect one’s personal space.

When Japanese people move to a different city or town, they send postcards to their friends with the comment “Please drop by when you happen to be in town”. But in reality, even when they really go to that town, they will not drop by without any prior notice.

Well, that’s true. I guess they try not to bother that person and so they will not drop in without an appointment.

Yes, I find that Japanese people like to use the word “meiwaku (bother)”. Maybe they think that it is impolite to invite someone they just met to go somewhere. But for us foreigners, I am not speaking for all, but for me, at least, it does not bother me at all. On the contrary, I feel more than happy to be invited. Even if one has to decline the invitation because of some reasons, I don’t think one will feel unhappy, let alone bothered, by the goodwill gesture.

Of course, Azerbaijanis build a wall too. But when we become real friends, the “wall” lowers down. We casually meet one another and enjoy one another’s company. I hope that one day I will be able to hobnob with Japanese people in the same way too.

I see. By the way, Murad-san, do you have any advice for the young Azerbaijanis who are considering studying abroad?

Japan is a very safe country and the people here are very kind. I am sure they will be able to study here without any worries. But if I have to say one thing, I will advise them to study some Japanese language before coming here, no matter if your goal is not to master the language.

Actually, when I was staying with my host family, we had a “mochitsuki (rice-pounding)” event with the neighbors as well. Some of the foreign students who were not good in Japanese couldn’t communicate well with the Japanese people who couldn’t speak English. In that sense, I was lucky to be able to spend a good time talking to all the people there because I can speak Japanese.

OK, now I have the last question. Could you tell us your dream?

My dream is to start my own business one day. I would like to open a restaurant where I can introduce Azerbaijan cuisine in Japan. And in Azerbaijan, I would like to open a shop selling interesting things from Japan. By introducing Japanese and Azerbaijan things to each other, people of two totally different cultures, I believe I can help deepen the understanding and friendship of both countries. 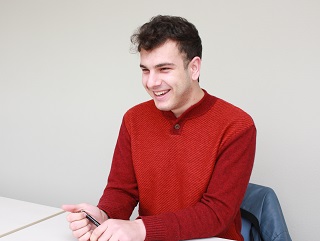 I think that is a wonderful dream. I am looking forward to visiting your restaurant and shop. All the best!

Thank you. I will do my best! 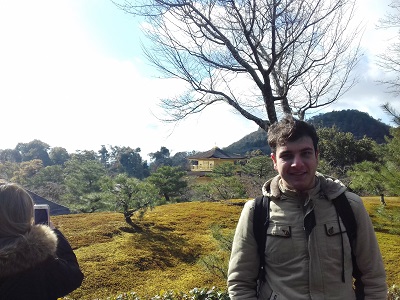 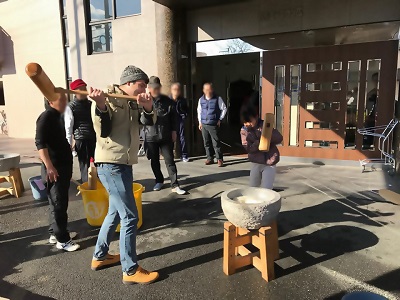 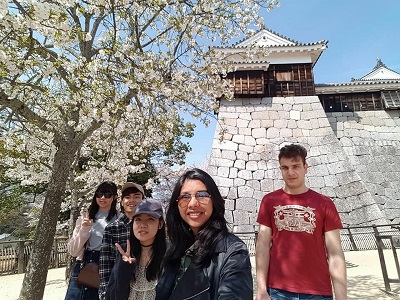 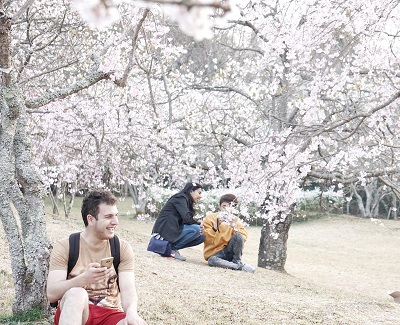 Cherry blossom viewing at Kagamiyama Park near the university