"The World of Kakuhitsu" - Interview with Professor Emeritus Yoshinori Kobayashi

Profile: Born in Yamanashi Prefecture in 1929. Worked at Hiroshima University for 72 years. Received the Japan Academy Prize and the Imperial Prize in 1991. Retired and became a Professor Emeritus of Hiroshima University in 1992. Awardee of a “Person of Cultural Merit” in 2019, an official Japanese honor and recognition awarded annually to select people who have made outstanding cultural contributions. 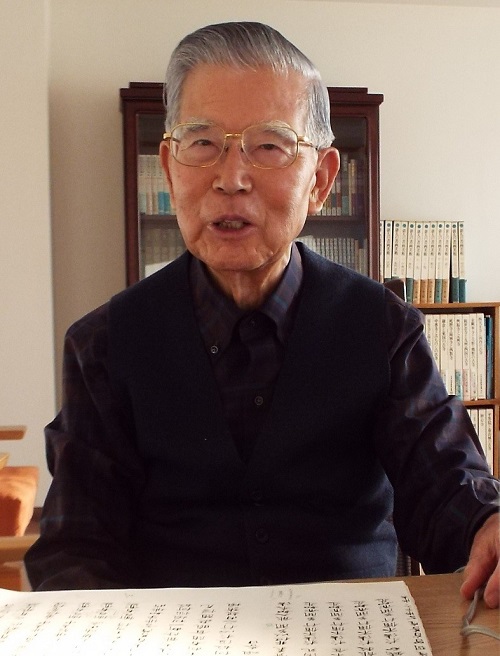 Encounter with the stylus - Kakuhitsu

As my research subject concerns history of Kanbun Kundoku (Japanese reading of Classical Chinese by literal translation), I used to visit ancient temples in Kyoto and Nara in search of my research materials. My first encounter with the Kakuhitsu was in 1961 when some Classical Chinese writing was discovered in a temple in Koyasan. The writing was put on display at the exhibition in the temple. When I saw it, I happened to notice that there were some symbols, looking like nail marks, next to some Chinese characters. Since these marks were colorless, i.e. no ink was used, they had been completely overlooked by other researchers until then.

What did these stylus-impressed marks mean?

The stylus-impressed documents were in use from the Nara to the Edo period, and most marks were there to show how to read Classical Chinese texts. I found letters, old documents and even mokkan (wooden tablets) that were stylus-impressed. I think that people from that time used to write and read with this stylus while using the candle light.

More or less, I have come to understand the possible reasons behind using the stylus. The beauty of Kakuhitsu is that the writing (characters and marks) did not stand out, which means that it was not used for formal documents or writings, but for personal use (e.g. when you leave comments or messages on a paper). I also came across the spoken Japanese and slang words in those periods on the stylus-impressed documents. 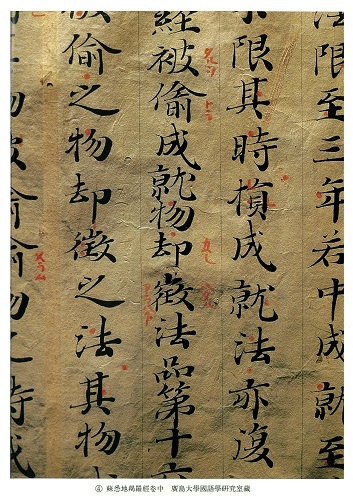 Kakuhitsu (stylus impressed) document
Marks can be seen in the fourth vertical column from the right, next to the characters "却徴之"

Is the culture of Kakuhitsu unique to East Asia?

My research at the British Museum proved that the stylus was also in use across Europe. On the hand-printed bibles assembled in the 11th and 12th century, I came across ancient letters, signs and pictures that seemed to have been written with a stylus. I also saw similar marks in The Koran. Therefore, it seems that the Kakuhitsu was in use not only in East Asia but also in Europe and the Middle East. However, this research has just begun.

“I believe that approaching ancient documents from the viewpoint of Kakuhitsu will lead to the discovery of more unknown techniques and traditions of different cultures. I hope and expect Hiroshima University to lead the international research communities regarding Kakuhitsu on ancient documents”