Hiroshima University students vow to take on the responsibility of spreading the stories and honoring the strength of atomic bombing survivors. 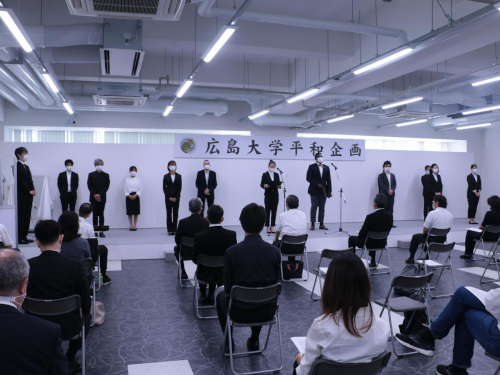 Participants at the recently held 2020 Students’ HIROSHIMA Summit to Think about Peace wore masks and kept their social distance as they delivered the “2020 Students’ HIROSHIMA Declaration” at Hiroshima University’s 2020 Peace Project event. On Thursday, August 6, the university joined the world in remembering the 75th anniversary of the atomic bombing and its lessons on the human capacity to destroy and pursue peace. Protocols to halt the spread of coronavirus were followed during the event which was also streamed online.

Hiroshima University students are rising to the challenge of continuing the legacy of peace started by those who survived the atomic bombing 75 years ago.

The students vowed their commitment to a world free of nuclear weapons and discrimination as they read the “2020 Students’ HIROSHIMA Declaration” during this year’s Peace Project celebration, an annual event commemorating the atomic bombing attack that devastated Hiroshima and Nagasaki in 1945.

As the population of living atomic bomb survivors — known as hibakusha — decline, and their average age now exceeding 83 years old, the students said it is time for the next generation to carry on their fight.

“After experiencing one of the darkest moments in human history on August 6, 1945, the atomic bomb survivors, known as Hibakusha, have created and sustained a truly inspiring movement toward a nuclear-free world,” the students said.

“Today, we honor their resilience. We pay our respects to those who walked the streets of Hiroshima on that day at 8:15 a.m., skin burned, clothes torn.”

The declaration was a product of a months-long students’ peace summit held by the university’s Center for Peace to envision the future of peace in a post-coronavirus world.

Despite a diminished attendance due to COVID-19 crowd restrictions, the event’s message of peace remains as powerful.

The pandemic which had ravaged the globe had surfaced the issues of structural discrimination, disregard for humanity, and lack of solidarity within state relations, the students said.

“Our appeal for a nuclear-free world goes hand in hand with our call to end discrimination,” they said.

“We see and hear the calls of the Black Lives Matter movement. We seek justice for people living in conflict. We feel the pain of women and LGBTBQIA+ people who face discrimination based on their gender or orientation.”

Hiroshima University whose foremost guiding principle is the pursuit of peace has devoted itself to peace education, exploring its different aspects from human security to science and technology.

“Through peace education, we can teach about the devastating effects of nuclear weapons while promoting empathy, respect, and human dignity. This starts with us: we must reject false information and learn from past mistakes. Respect must be our guiding principle to lead our actions,” the students said.

“We want to live in a world absent of violence in all forms. This is the vision that lies in the hearts of our youth. We are committed to achieving this society.”

Globally, up to 13,400 nuclear warheads still exist as of January 2020. The UN passage of the Treaty on the Prohibition of Nuclear Weapons, which was a major win for the hibakusha, has not gained the support of nuclear-armed states. As of August 1, 2020, it has been ratified so far by 40 countries, 10 short for it to take effect. Japan has not signed or ratified it.

As the only country that experienced the horrors of nuclear weapons, the students urged Japan to take a stand by signing and ratifying the treaty.

Viola made from nuclear-bombed trees unveiled

Hiroshima University President Mitsuo Ochi also unveiled at the event a viola made from trees that survived the nuclear explosion. Last year, the university made a violin out of a weeping willow that lived through the nuclear blast 370 meters away from ground zero.

The whole event which was streamed live on YouTube ended with a short concert for peace using the two instruments. The university hopes these instruments would play a role in peacebuilding through their music.

Failed to see it LIVE? Check out the events during the 2020 Peace Project here.