Looking to the acorn worm for clues: Why vertebrates cannot regenerate their bodies

A group of Japanese and American researchers found that the Ptychodera flava, a worm-like marine organism capable of regenerating its entire head or body, draws on reprogramming-based mechanisms that help somatic cells in higher-order animals branch out into complete body parts. Commonly known as the Acorn Worm, the animal shares evolutionary roots with chordates and mammals that can be traced back from the most advanced vertebrates, including humans.

The acorn worms utilize pluripotent stem cell (iPSC) reprogramming factors to regenerate their head or body, according to lead author Kunifumi Tagawa, an associate professor and director with the Marine Biological Laboratory at Hiroshima University’s Graduate School of Integrated Sciences for Life.

The team published their findings on February 15 in Frontiers in Ecology and Evolution. 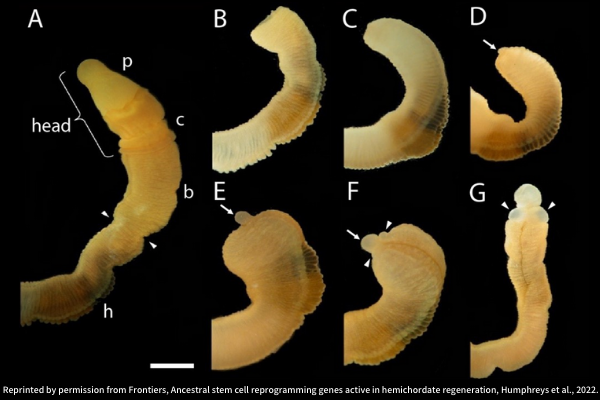 In biology, reprogramming factors refer to molecules or proteins that can trigger cells to become any type of cells.

“Since there are no known vertebrates able to regenerate their whole-body, better understanding how the acorn worm achieves this feat drawing on reprogramming gene networks could hold keys toward future advances in regenerative medicine for humans,” Tagawa said.

Tagawa’s team observed several unique genes expressed in the acorn worms during head regeneration not seen in chordates and other higher-order vertebrates. “Based on these results, we propose that hemichordates may have co-opted these reprogramming factors for their extensive regeneration, or that chordates may have lost the ability to mobilize these factors in response to damage,” Tagawa said. “The robustness of these pluripotent gene circuits in formation of induced stem cells from mammalian somatic cells shows that these programs are intact in humans and other mammals, and that these circuits may respond to as yet unknown gene regulatory signals.”

Scientists have observed the capacity of hemichordates such as planaria and hydra to regenerate since the 19th century, but only recently have used them as a model for studying regenerative processes. Being the most advanced of animals observed with regeneration capacity and more closely related to humans than planaria and hydra, acorn worms still uniquely share the ability with lower-order organisms to regenerate, however, they lack “totipotent stem cells” – individual cells from which the entire organism can completely regenerate. Hemichordates do have a reprogramming gene network that allows cells to become pluripotent state in order to recreate an injured structure or organ. “As such, this further illustrates how studying hemichordate regeneration is a promising new thread in the field of regeneration biology,” Tagawa said.

The research team collected acorn worms from a flat shallow reef in Paiko, Oahu in Hawaii. They sampled worms ranged from 4-10cm in length. They then cut portions of the worms’ bodies and observed them in clean glass bowls throughout 12 days of regeneration, at which point the animals regained their natural burrowing behavior and could crawl out of the bowls. In each experiment, the collected animals were cut at the posterior end of the branchial clefts. Reprogramming factors analogous to those released in vertebrates to signal tissue healing following an injury were found, usually first appearing in worm samples preserved 24-48 hours after being cut.

Also Read: On an island laboratory, a scientist is drawn to the simple life

This functional overlap with higher-order vertebrates sets the stage for further investigation into the exact mechanisms of hemichordate regeneration, according to Tagawa. Just why acorn worms can deploy their reprogramming factors to regenerate substantial parts of their bodies while vertebrates cannot remains a mystery. “We would like to address this question by continuing to study hemichordate regeneration and try to identify factors to reactivate pluripotent gene networks,” Tagawa said. “This is a significant step toward future therapeutic and possibly lifesaving interventions in humans using stem cells.”

Collaborators from the University of Hawai‘i and the Okinawa Institute of Science and Technology Graduate University also contributed to this research.