Hiroshima University began the doctor-led human trial of a promising new microRNA drug that could shrink and prevent the recurrence of tumors of malignant pleural mesothelioma. 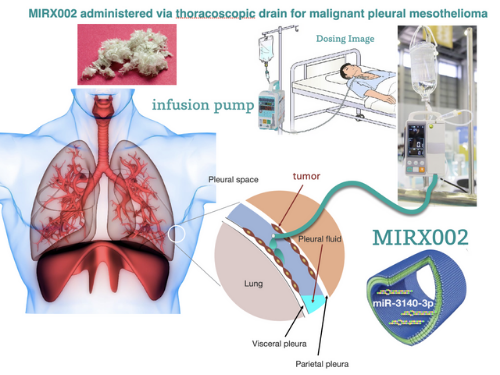 Hiroshima University (HU) began the doctor-led human trial of a promising new microRNA (miRNA) drug that could shrink and prevent the recurrence of tumors of malignant pleural mesothelioma, an aggressive and treatment-resistant cancer caused by asbestos exposure.

The miRNA drug MIRX002 was administered to the first subject who enrolled last January 12 in the Phase 1 first-in-human study. It is HU’s first drug discovery that progressed into human trials.

Malignant pleural mesothelioma is a treatment-resistant cancer that develops in the pleura, the thin membrane that lines the lungs and chest cavity, decades after asbestos exposure. Asbestos was widely used during the high-growth period of the 1960s due to its ability to fireproof steel materials. According to 2018 data from the World Health Organization, about 125 million people in the world are exposed to asbestos in the workplace.

There is currently no effective treatment against it and patients usually have an average life expectancy of around one year after onset.

HU Graduate School of Biomedical and Health Sciences Professor Hidetoshi Tahara, who leads the team of Japanese scientists behind the anticancer miRNA drug, has launched PURMX Therapeutics Co., Ltd. in January 2021 as a new venture of the university to carry out the clinical study. Dr. Morihito Okada, professor at the Department of Oncology of HU’s Research Institute for Radiation Biology and Medicine, is the doctor designated as principal investigator in the trial.

An miRNA is a smaller type of RNA, a natural nucleic acid, that can regulate gene expression. MiRNA-based drugs are attracting attention for their capability to shut down the expression of abnormal genes. There are about 2,600 known types of miRNAs.

The active ingredient of the anticancer drug MIRX002 is the natural nucleic acid miR-3140-3p. The drug targets cancer stem cells, which is known to drive tumor growth and its recurrence.

The researchers have completed testing the safety and efficacy of the drug in non-clinical animal studies. Using mouse models, they observed significant tumor shrinkage and prolonged survival after one to three treatments via intrathoracic administration. They also clarified that the drug has a mechanism of action that can distinguish between normal cells and cancer cells. Thus, the risk of side effects of MIRX002 is considered to be extremely low.

The Phase 1 trial will investigate the drug’s safety, appropriate dose, and method of administration in humans. To ensure that the miRNA is protected from degradation until it is delivered to the cancer cells, PURMX Therapeutics Co., Ltd. licensed the surfactant peptide A6K from 3-D Matrix Co., Ltd.

If the drug’s safety and tolerability can be confirmed in the clinical trial, it can prove to be a breakthrough therapeutic agent that can suppress and prevent the recurrence of tumors. MIRX002 also exhibits potential as an effective antitumor therapy against breast, pancreatic, esophageal, and ovarian cancer.

This clinical trial has been adopted under Seeds C of the Japan Agency for Medical Research and Development’s (AMED) “Translational Research Program” (2021 to 2023) with the Hiroshima University Hospital Medical Center for Translational and Clinical Research in charge of support. Furthermore, Hokkaido University, which is a translational research support base, is in charge of data management and statistical analysis. This research has also been adopted under Seeds B (2017-2019) and preC (2020) of AMED’s “Translational Research Strategic Promotion Program.” PURMX Therapeutics Co., Ltd. headquartered in Hiroshima City manages the production of the experimental drug. Meanwhile, 3-D Matrix Co., Ltd. headquartered in Chiyoda-ku, Tokyo is investigating the surfactant peptide “A6K’s” efficiency in protecting the miRNA from degradation until it is successfully transmitted to the cancer cells. “A6K” is exclusively licensed and provided to PURMX Therapeutics Co., Ltd.