Explanation of the Anomalous Sea Level Mechanism in Hiroshima Bay!: Detection of a 16-Day Cycle of Water Temperature Variations 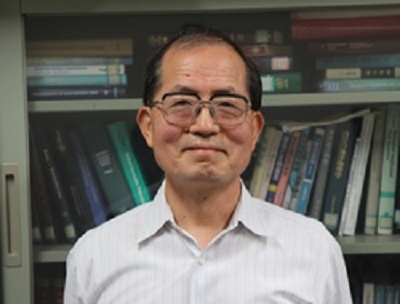 We talked to Professor Arata Kaneko, Social and Environmental Engineering, Institute of Engineering.

On April 10, 2012, the research group of Professor Arata Kaneko from the Institute of Engineering held a press conference about the research results with the title: “Explanation of the Anomalous Sea Level Mechanism in Hiroshima Bay- Influence of a16-Day Cycle of Water Temperature Variations.”
For the press conference click here. (Japanese page)

On September 29, 2011 and on September 18, 2001, an anomalous sea level was measured in Hiroshima Bay. The rise occurred after a typhoon had already passed by and on days that were mostly calm with only a slight breeze. The fact that the floor of Itsukushima Shrine was flooded was widely-reported on TV and in newspapers.

Professor Kaneko discovered that the main causes of the anomalous sea level are the vertical profile of water temperature, typhoons and coastal topography.

We asked Professor Kaneko about the newest research results on the currents of the Seto Inland Sea and the present situation of Japanese physical oceanography.

Measuring the current by the new ocean “acoustic” technology

Professor Kaneko specializes in “Ocean-Atmosphere Systems”. He mainly investigates the influence of the Kuroshio Current (Black Tide), which washes the southern coast of Japan, on currents and water temperature variation in the Seto Inland Sea.

To measure the distribution of current in a wide region, Professor Kaneko needed to install numerous underwater observational instruments. Then, he had to analyze the data from widely distributed observational points. However, the Seto Inland Sea has been famous for its fishing industry since ancient times, which made wide-region installation of the instruments very difficult and the research was possible for quite limited time and space.

Then Professor Kaneko decided to apply an “ocean acoustic tomography, a technology that enable an instant measurement of current and water temperature variations by traveling sound. The system is composed of a pair of acoustic stations equipped with instruments, installed on both sides of a channel that send out acoustic waves. Current velocities are determined by the differential travel time. Water temperatures, on the other hand, are measured by the average travel time.

These instruments are sized smaller than the previous ones. They can be set up at coastal breakwaters and operated without impacting the fishing industry.

This method was first developed in America, the leading nation in oceanography. Prior to now, it had been used for current measurements in the open ocean of the Atlantic and Pacific, but Hiroshima University was the first ever to apply it in coastal areas.

At present, these instruments are still leading edge equipments, not being utilized globally yet although the related technology has been transferred to the research organizations of Korea, China and Taiwan from Hiroshima University. 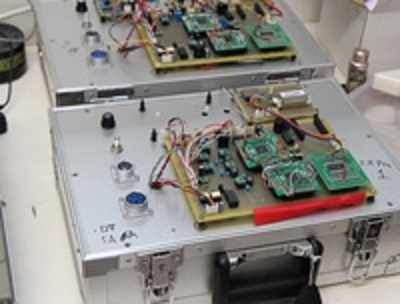 This equipment for measuring oceanic variations was also constructed by a graduate student (Naokazu Taniguchi) in the laboratory. 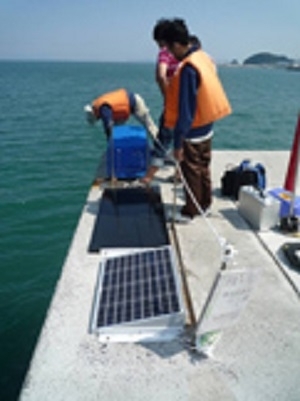 Installing the equipment at a breakwater.

Meanwhile, on September 29, 2011, in Hiroshima Bay, an anomalous sea level was measured. It was 35cm higher than the predicted maximum sea level of the spring tide in autumn. 35cm may seem to be a slight difference, but when spring tide coincides with flood tide, the floor of Itsukushima Shrine floods and the social effects can’t be disregarded.

Professor Kaneko focused on the following 3 points as possible reasons for the anomalous sea level.

Professor Kaneko analyzed the data earned by ocean acoustic tomography measurement in the region of Aki-nada, central part of the Seto Inland Sea and detected that there is a 16-day cycle of water temperature variation.

Such a temperature variation was also documented in Hiroshima Bay, where an anomalous sea level was measured, and Professor Kaneko anticipated that the phenomenon above-described must be the reason for it. 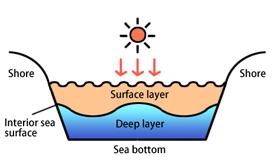 It is believed that typhoons must be one of the main reasons for high tide water. In fact, 8 days before September 29, the day when an anomalous sea level was observed, the “15th Typhoon of 2011” moved across the southeast coast of the Kii Peninsula. But at that time, the phenomenon of high tide water 8 days after a typhoon had never been taken up by oceanographers. The anomalous sea level mentioned above was considered unrelated to the typhoon. So, Professor Kaneko was surprised to discover that also on September 18, 2001 an anomalous sea level was measured 8 days after a typhoon passed off the coast of Kii Peninsula. 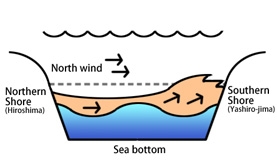 1. The strong northerly wind of the typhoon pushes the warm surface layer from the northern shore (Hiroshima Bay) to the opposite southern shore (Yashirojima). 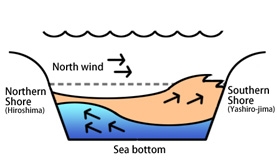 2. Parts of the deep layer move upwards to compensate the deficit of surface layer sea water. This phenomenon is called “upwelling”. 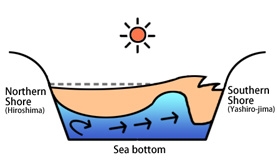 3. After the typhoon, the deep layer seawater, which was lapping against the northern shore, swings back to the southern shore. 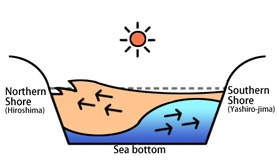 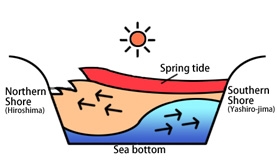 5. As this oscillation of sea water coincided with the spring tide, an anomalous sea level could be measured.

When a typhoon passes, the sea water of the deep layer accumulates at the northern shore, and then takes 8 days to travel back to the southern shore, half as long as an ordinary 16-days-oscillation between the two shores. The period of 8 days perfectly coincides with the occurrence of the anomalous sea level!

“8 Days Post-Typhoon” seems to be the important keyword. Professor Kaneko says: “When an anomalous sea level (storm surge) is observed during a typhoon, the correlation is quite obvious. But when a flood tide occurs long after a typhoon hits, at that time, when people forgot about the typhoon, and when it is the result of sporadic waves of interior sea surface, the flood tide is not considered to stem from the typhoon.”

A major step forward after 40 years

The movement of the deep layer sea water, which was essential for this detection, is called “internal surge” in physical oceanography. Already in the 1970s, this phenomenon was documented at Loch Ness by S.A. Thorpe at that time a leading researcher of the National Institute of Oceanography. In the science magazine Nature was written as follows: “The strong wind causes a flow of near-surface water to one end of the Loch Ness (slender lake) and a depression of the interface at that end. When the wind falls, the tendency of the interface to recover a level position initiate the surge, which is over 10m in height.”. (At the present, Dr. Thorpe is a Fellow of Royal Society and is still an internationally-respected authority in this field!)

Now that I mention it, I have to say that the Hiroshima Bay is not a lake, but as the bay is surrounded by numerous small islands, its landscape is similar to a lake.

But until now, nobody has made reference to surface elevation, and research on “anomalous fluctuation of water surface by internal surge” has been neglected. Also as far as the ocean is concerned, there have been no records about such a phenomenon.
We can say that Professor Kaneko’s detection was a major step forward after 40 years. 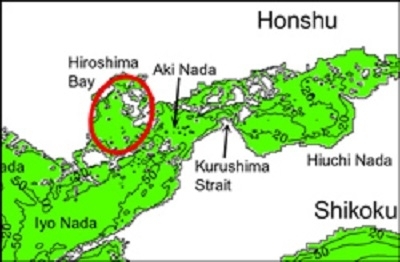 Isn’t the landscape similar to a lake?

Japanese Oceanology is falling behind!

Professor Kaneko said: “To tell the truth, Japanese oceanology is falling behind other countries.”
When Professor Kaneko studied as a visiting scientist at the world’s leading Woods Hole Oceanographic Institution in America, he became keenly aware of that. In America, oceanographic institutions actively collect data, and the army publishes satellite observation data. Everything necessary for top level oceanographic research is well-organized. The Japanese Meteorological Agency and Coast Guard publish such data to a certain extent, but not enough. In fact, there is a considerable shortage of data for research.

Professor Kaneko decided to pursue this field because he was alarmed about the condition of Japanese oceanology.
“With the data presently published within Japan, you can research ‘to a certain extent’, but when you want to go further than ‘a certain extent’, you have to collect data by yourself. When you are glued to your desk, research doesn’t proceed.”

Professor Kaneko has already almost finished his prepublication paper on the anomalous sea level in Hiroshima Bay, which will be published in "Nature" and so on. In the future, he plans to focus not only on typhoons but also to check the relationship with “sweet water” from a hydrodynamic viewpoint, which is brought to Hiroshima Bay by the Ota River.

For the future of Japanese oceanology, Professor Kaneko makes strong efforts to transfer the technology of “ocean acoustic tomography” to the next generation of oceanography researchers. At present, he is instructing international students from Indonesia and China.

“With the help of ‘ocean acoustic tomography’ it will be possible to collect data from coastal areas, which was difficult before. For the future of Japanese oceanology, I want to expand the use of this technology in Japan”, said Professor Kaneko, expressing his enthusiasm. 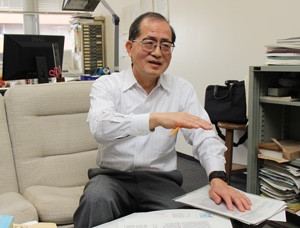 “I wish to contribute even a little bit to the progress of Japanese oceanology”.

When I saw the news on TV about the flooded floor of Itsukushima Shrine, I didn’t pay any attention to it. I just thought: “Really? That’s strange.” But after this interview with Professor Kaneko, I realized that everything has a reason. You just have to analyze every phenomenon leaving nothing unexplained. And I was deeply impressed by Professor Kaneko’s attitude and his distinct words: “You have to collect the data you want by yourself!” The technology of ‘ocean acoustic tomography’, which was mentioned in the interview, is also said to be helpful for predicting the occurrence of Tsunami. We hope that in the future, this technology will become main stream in Japan too, and that it will be used on a variety of fronts! (S)