"We live in a dynamic world" 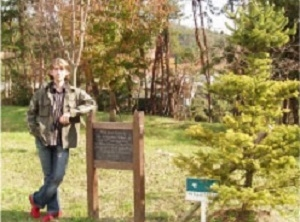 For our very first edition of "Voices from Around the World," I met with 26-year-old Andrey who hails from Belovo in Southern Siberia. Andrey is a Ph.D. student at IDEC (the Graduate School for International Development and Cooperation) and has also written a book about his time as a HUSA student entitled "One Year Under the Sakura Tree," as well as writes for a Russian newspaper about Japan, and is an active entertainer and dancer. But what does he think about HU and life in Japan? I went straight to the source to find out.

Why did you choose HU?

HU at the time had an agreement with my university, Tomsk Polytechnic University, and so I decided to go. It was my first time being abroad for a long time.

I never really thought about going to Japan before, but I did want to study abroad, so because my school had the exchange agreement, I decided, why not? I didn't know much about Japan before I went, as is the case with most in Russia, but now that I've been here, I feel like a bridge between Russia and Japan because I get so many questions about Japan and life here.

What is it like living in Japan, as say, compared to Russia?

Well, I can't really compare them because Russia is my home, and this is like my second home.

Then what is it like to live in Japan as a foreign country?

Well, it's totally different in Japan - the lifestyle. It's cool, I appreciate the kindness and politeness of Japanese people, you know, the respect, and all. There are political issues between Russia and Japan, but I don't feel it. I've never had a case where it's come up.

What do you think about Saijo and Hiroshima?

Saijo...it's a very nice place to study (laughs). It's a good place for a campus, the city (Hiroshima) is pretty close, sort like a small world, everything is close. You know, every day I learn something new, even now. The last article I wrote (for a Russian newspaper) was about Japanese roads.

Yeah, like about their behavior on the road, the quality of the roads - it might not be anything to write about from the Japanese perspective, but for me, it's very interesting. I always appreciate being able to see Japanese life from inside of it.

So you're taking courses here as a Ph.D. student - what is your favorite class?

Well, I'm not taking any classes now, but before I started my research, I liked how they had specialized courses for my major - economics, etc. And my supervisor, Professor Kaneko, in spite of the fact that he is quite young, has a lot of students. He's very clever, and we have good professional relationships(?) - I can discuss with him my current activities almost any time.

Have any advice for students wanting to study here?

Well that depends on which context (laughs) - as an exchange student or?

Well you've had experiences with our HUSA (Hiroshima University Study Abroad) Program and as a Ph.D. student so...I guess both.

Respect what they have here - be familiar with Japanese culture, and don't try to change it. Students need to be ready for Japanese reality. They should read about it, get familiar with it. There are some students who come here thinking that it's something else and are disappointed. And actually, I'd like to one day start a cultural exchange program between Russia and Japan.

What about learning Japanese?

There is a mandatory 6-month intensive Japanese program (language course?), which you can either continue or quit after 6 months...I quit to focus on my research but now I'm trying to learn more on my own. After 5 years in Japan and not being able to speak Japanese...

How did you get along without Japanese? (laughs)

Well I know enough to get by.

We have a lot of clubs or circles on campus - have you had any experiences with those?

Well not on campus, but I have been taking traditional Japanese dance every weekend in Hiroshima City.

Really? How did you find that?

By chance. Last December, I participated in the Bangladesh Charity Show, and they sent me a DVD of the performances, since I couldn't really watch them while being a part of it, and I was really impressed with a performance of traditional Japanese dance, so I found the teacher who was in charge of it and she let me join. Actually, next May I'll be performing in Hiroshima.

So why dance? What drew you to that?

Well I've been dancing for 9 years, learning Russian, Ukranian, Greek and other folkdances-but not Japanese! (laughs) Like I said, not many people in Russia know about Japan.

Maybe you could start a dance exchange!

Do you have many chances to meet Japanese and other international students?

Of course! I meet new people everyday. The Japanese students in the lab are very helpful.

Are you living in the dorms or an apartment?

Apartment. I lived in the International House for half a year though.

But you know, if you ask me the worst thing about it is the Japanese winter.

I'm from Siberia, and have experience -53C but in Russia, it's cold outside, but warm inside. Not so in Japan (laughs)

Never thought I'd hear someone from Siberia say that Japanese winters were cold! (laughs) So what's your typical day like here?

Do you make Russian and Japanese food?

Not much Russian food, no. But I like Japanese food. Usually I have my lunch in the school cafeteria, have breakfast at home.
On Saturdays I go to my dance class in the city. I take the train and I also use a scooter - that's right, another hobby of mine is travel!

To travel and see the country. I once went from Saijo to Nagasaki, to Kyoto...I like being able to just go where I like and if I feel something there, I stop and write.

Where else have you been?

To Oita, Beppu, Fukuoka, Himeji, Onomichi, of course Tokyo and I'm planning to take a trip to Kochi during the(?) Golden Week.

What are your plans after you get your Ph.D.?

I think I'd like to work for an international organization, like the World Bank. Actually being here has made me realize that I want to do international work. I participated in a World Bank Conference in Tokyo, and IDEC had some great classes on it. I mean, IDEC is international so...

What are you studying now?

I'm researching drinking water quality in Russia from the scientific and environmental economic side.

Saijo is famous for its sake and as they say, good water makes good sake.

It's amazing, you turn on a tap and you can drink from it. In Russia, if you go to fill a bathtub, you can't clearly see the bottom of the tub once it's full. But I am often asked in Russia, "why are you studying Russian water in Japan?" (laughs) I tell them I don't know but most probably because I would like to solve this problem.

Do you think you'll return to Russia after graduating, or will you stay in Japan?

I dunno...if I have the chance to stay, sure, if I can get a good job in Russia, then I'll go there. I have another 2 and a half years to go until I graduate, which is a long time, you never know what will happen. We are living in a dynamic world.

Well I'd like to thank the Japanese government for funding me.

Well thank you so much for your time today. We really appreciate it. 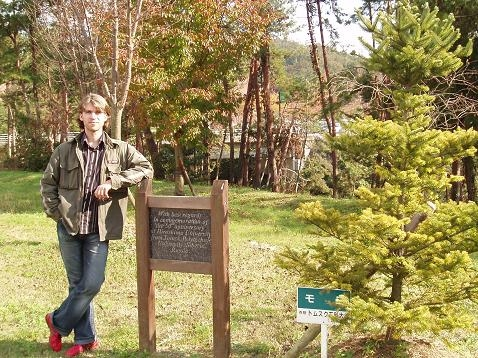