"Enjoy and appreciate the differences between us" 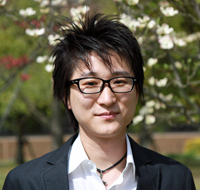 Thank you for allowing me to interview you today. First, let me begin by asking how long you have been in Japan.

You mentioned that you wanted to teach Japanese – what sparked your interest in teaching? Was it anything in particular?

I had been interested in foreign languages since I was a kid, and so I tried lots of different languages out (English, Spanish, French, German).

I can only really speak a little of each (laughs). At first, I really wanted to study Spanish. I liked the way it sounded. But wanting to learn something, and the reality of learning something are a little different. My dream is to be a teacher. In order to realize that, I can’t just speak a language, I have to research it. That’s when the idea of Japanese popped into my head. While Japanese and Korean are similar in many respects, I realized that they also differ in several ways as well, so I thought I would study Japanese.

When did you start studying Japanese?

When I was a freshmen (first year) at my university.

I think that Korean Japanese language education might be a little more advanced than in other countries. We start with learning hiragana and katakana (basic Japanese syllables), and continue on to making conversation by junior or senior year (3rd or 4th year). We use games to learn, or meet with Japanese people… things like that.

Sounds like you were able to have fun while learning! So was the main element conversation rather than reading or writing essays?

Yes. We do have classes for writing compositions, but that’s mostly just for tests, so I would say conversation was the main emphasis.

I often hear that Korean and Japanese are really similar, but how similar are they really?

The Korean and Japanese readings for many kanji are similar. For example, “junbi” (preparation) in Japanese is also “junbi” in Korean; “toshokan” (library) is also “toshokan”. So just by studying the vocabulary and grammar a little bit, Koreans can easily speak Japanese.

Oh wow, I’m jealous! So what is your current research topic about?

I’m researching expressions of conjecture in Korean and Japanese. For example, “it seems like…”, “it looks like it’s going to rain”, “they say it’s…”, etc. I’m also studying judgment expressions like “it should be…” I’m studying in what situations these phrases are used and how they are used.

Is there anything you’ve found really interesting in your research thus far?

To give just one example, in Japanese conjecture expressions, there isn’t much solid judgment used. Everything is “I think…” or “…or so I heard”. In Korean, there’s more judgment used and less “I think…” This made me consider that language expresses the personalities of peoples on the whole, which is pretty interesting.

Ah, so Korean is more clear-cut in terms of language. By the way, I see that you’re enrolled at IDEC. I thought you would have enrolled in the Graduate School of Letters since you’re studying Japanese language.

Well, my major is language, not humanities, and I really strongly wanted to comparatively study Korean and Japanese. So when I started looking for a professor to suit my needs, there was a professor at IDEC who was specialized in Korean language. I immediately asked if I could study under him and received his permission (laughs).

Ah, I see. You mentioned that you also often interact with not just Japanese people, but Europeans and others as well. Is that due to studying at IDEC?

It’s not completely due to IDEC, but I interact with others at say the cafeteria or through soccer and lots of other places too.

My friends and colleagues all really like sports like soccer and baseball, so the Koreans and Japanese and whomever else all get together and play…and after that, head to hot springs (laughs). There are so many Japanese people who like hot springs! After the hot springs, we’ll have dinner while drinking beers and than play games and talk at night.

While we can’t exactly talk while we’re playing, after the game is over, we all get together to talk, and of course, stories about our home countries come out. If there’s something I don’t understand, they’ll tell me “this is how it is in (x country)”. On the other side, I also explain to them how things are in Korea. In this way, we can enjoy and appreciate the differences between us.

After becoming friends, we go out to eat and talk over lunch or dinner. Then after we eat, we’ll go play sports and have even more fun! 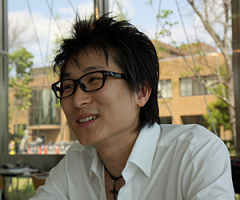 I see – so that’s another way for international exchange to happen. You mentioned that your impression of Japan is that Japanese people are kind. Is that when compared to Korean people or…?

Hmm…for example, when I ask a Japanese person for directions, they usually give me both directions and additional information such as “if you go to XYZ, be sure to be careful”. If I tell them I’m going to a certain place on vacation, they often will tell me “have a nice trip”. And what’s more, they almost always answer my questions with a smile! I think that’s really amazing. It’s not that I’m saying that Koreans aren’t kind…. It might just be the language that the Japanese use or their way of saying things.

I see. Have you had any experiences with study abroad before? Or is there anything about you that has changed, or do you feel you’ve grown a little more thanks to your time here?

This is my first time studying abroad. Since this is a foreign country, of course you have to live on your own. I of course learned many things through my studies here, but I also learned how to live on my own and about the importance of relationships with others. I didn’t just meet my upperclassmen or peers, I met people from all over the world and through our interactions, gained many things. I also learned about the importance of self-management. By keeping your life in order, you’re able to really focus on your studies! I’ve also been able to learn a lot by interacting with not just Koreans, but with students from many different countries.

So as for your dream of becoming a teacher, could I ask you a little more about that?

I just really love teaching, more than anything else. I suppose rather than teaching, it’s the process that I like. In my opinion, when you teach someone something, you’re also learning something yourself. Talking to students, you’re trading your knowledge and information back and forth between each other. That’s what I like.

I also think that what you teach comes back to you in other ways. Something you taught a student is passed on to someone else, and then to another, and so on and so on… As a result, maybe even the whole country might change! I know it sounds kind of silly but…(laughs)

No, no! It’s a wonderful thought! So I take it that you’ve had your fair share of good teachers while growing up?

I’ve had many different kinds of teachers from elementary school through high school – many of whom left an impression on me and whom I respect. When I would go to them for advice, they treated me kindly, and sometimes were a little heavy-handed. But I’ve learned that through their words of advice, my life has changed little by little. This might be more of a parental job, however, teachers sometimes take on the role that parents can’t play, you know? The opposite is also true, of course… But because of this, I wanted to become a teacher.

When I was in middle school. I went to ask my teacher for advice about trouble I was having with math and geography. The teacher was actually a physical education teacher, but he gave me the following advice: “Why don’t you try to change how you’re studying?” I used to study late at night by myself, so I started thinking of different methods like asking others or trying to use geography in my everyday life. By changing my methods, my grades started to improve, and I thought that if so much could change through just some simple advice, than teaching must be a really worthwhile profession.

That’s when it all started and I wanted to become a teacher. 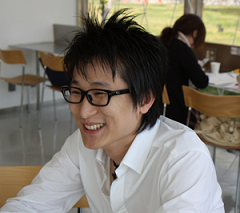 Being a language teacher means not only teaching language, but also teaching culture as well. Is that one of the reasons you wanted to study abroad here in Japan?

I could have studied Japanese in Korea, but I thought that by actually coming to Japan and learning how the Japanese think and how they live that I would be better able to teach my students “living Japanese”.

Is there anything that surprised you about life in Japan?

Surprised me? To give an example about the differences in Korean thinking and Japanese thinking… it’s not that this is a bad thing, but, it’s probably in how we deal with other people. Japanese people are often overly cautious with their speech and mannerisms around others. But if you’re too cautious, then you cause the other person to also be very cautious. When that happens, this is what I say to my Japanese friends: “You don’t have to stand on ceremony.” I think that sometimes it’s good to argue a little and get into small disagreements.

I actually thought the university was in the city (laughs). But there are good points to being in the countryside too, like the environment and nature. It’s very easy to live here and it’s also a good environment for study. After all, that’s what’s most important, right? (laughs) I mean, if there’re lots of distractions around, then people naturally get distracted, right? In that sense, Saijo is a great place (laughs).

Any words of advice for students wanting to study abroad?

Being apart from your home, it’s natural to feel a little uneasy and anxious. But the best way to relieve that is to go out and meet lots of people and get to know one another. You’ll not only learn a lot, but you’ll be able to have fun during your time abroad.

So how much longer will you be at HU?

After returning to Korea, are you nervous about finding a job?

I mean, when there is stability, people start to get lazy, so I think that having a little bit of pressure helps you to develop yourself. When things are economically secure, don’t you think that you sort of lose your incentive to work hard or study? What I’ve learned in my experience is that when things get tough, your motivation goes way up.

Well I wish you the very best of luck! Thank you so much for allowing me to interview you today, and enjoy the remainder of your time here!

Hiroshima University is... a global university.

Study Abroad is... learning that the opposite of success is not failure. You have to have confidence when studying abroad – that’s the key. 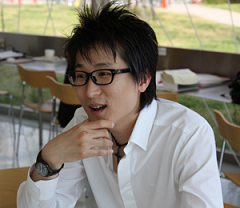 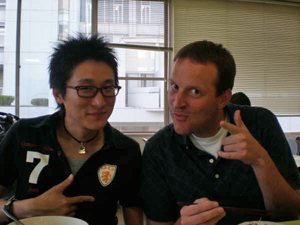 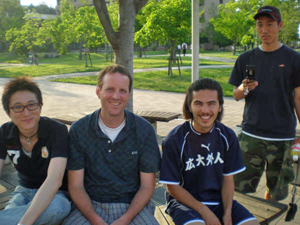