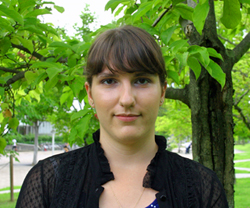 Thank you for allowing me to interview you today, Nadya. First, why did you choose to come to Japan?

Six years ago my family and I immigrated to New Zealand from Bulgaria. My first high school class in New Zealand was a Japanese language class, and from then on, I got hooked on Japanese and started to be really interested in Japan. I also had a really wonderful Japanese teacher, and so I think it’s partly due to that. I studied Japanese through high school and continued my studies when I began university.

Is Japanese language a mandatory class in New Zealand?

It’s not mandatory, but it is one of the more popular languages. So in most every school in New Zealand, they offer Japanese language courses.

I see. So what was your reason for choosing Japanese?

My native language is Bulgarian, but I’ve also studied English, Spanish, German, and other languages. But of them all, I found Japanese to be the most exotic language. Actually, Japanese pronunciation is very similar to Bulgarian, and while the words themselves are entirely different, the rhythm of the language and words are very similar.

Wow, I had no idea! How many years total have you been studying Japanese?

7 years. High school is 5 years long in New Zealand, and first and second year Japanese language classes were very plain and simple. The textbooks were in hiragana and katakana only, and we played games to learn the language - we had lots of fun while learning. However, from the third year on, we started learning kanji and the classes got harder and harder. But since I had such a great teacher, I didn’t quit. My teacher was Japanese and loved manzai (Japanese comedy), so he would use manzai comedy in his teachings. Classes were so much fun (laughs).

I hear you're currently studying the Tale of Genji. Out of all of Japanese literature, why did you choose Genji?

The most translated piece of Japanese literature is the Tale of Genji. When I was in high school, I randomly found a translated copy of Genji at a secondhand bookstore. I thought it would be interesting, so I read it and I was moved by the story. It was unlike any other book I had ever read. Usually Western literature consists of a main character, something happening to said character, and then a resolution of the conflict and a happy ending. But in Genji, the main character’s entire life is written here. There aren’t many huge conflicts - the story rolls slowly along like the life of the main character, Prince Genji. Plus not only is the story interesting, but it’s also a great way to study both literature and Japanese culture.

Every Japanese person knows of the Tale of Genji. I feel like they’re even more aware of Genji than they are of The Pillowbook or The Tale of Heike. It’s been turned into an animated series and a manga series, and “Genji Culture” is present even today. They have designs, fashion, and even sweets based off the story! (laughs) I’m researching to look at why the Tale of Genji is so inundated in Japanese culture.

I’m also interested in iki-ryou or “living spirits”, which is why I’m researching the story of Yugao in the Tale of Genji in particular. 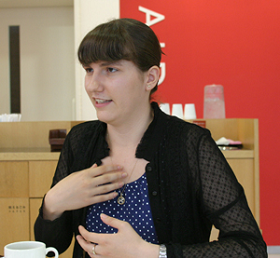 Everyone has heard of ghosts or demons, but living spirits are pretty rare, right? It’s also not something you seen in even literature of the same period. That’s part of why it’s so interesting. Long ago, people believed that humans had two souls. One was your normal soul that you carried with you all the time. The other was born of strong sadness or hatred. That soul would leave the body and do all sorts to terrible things. I was interested in just how much control one has over the “evil” spirit. For example, in Yugao, the spirit of Lady Rokujo kills Yugao. However, whether it can be called a murder or not, and whether Lady Rokujo is a criminal or not…

A fitting comment since you're interested in becoming an international laywer! (laughs) What began your interest in Law as a career?

Well, I’ve always been interested in languages, and I like interacting with people from around the globe. I’m also interested in law and love to debate, so I thought I might be good as an international lawyer. If possible, I’d like to work for the UN. It might sound a little naive, but I’d like to try and make the world a better place, even in a small way. That’s why I think it’d be good if I could speak a lot of languages (laughs).

What a wonderful goal! How did you get into Law?

I wasn’t too keen on law at first (laughs). But one day, a really talented lawyer came to my high school and spoke about his career and experiences. It was a really interesting talk and so I thought that being a lawyer might be fun. My teacher also recommended that I become a lawyer since I liked public speaking and debating during English class (laughs). That’s what got me interested in law.

Yet now you're studying the Tale of Genji (laughs).  Is there anything in Genji which relates to being a lawyer?

For example, I was really surprised to learn that Japanese people love comedy shows so much. Before I came to Japan, I had a very stoic and hardworking image of Japanese people, but after living here, I realized that most every TV show is comedy - and they’re hilarious at that! (laughs) Japanese comedy culture has its roots way back in Japanese history from kyogen to rakugo to manzai… it’s precisely because it has such a long history that it continues today! 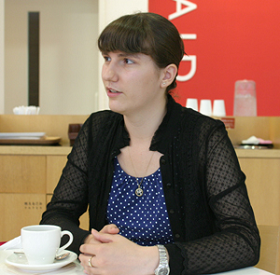 Studying culture through comedy shows! How marvelous! Have you looked into any other cultural aspects of Japan during your time here?

I really like Japanese castles, so I’ve been to Osaka, Himeji, and many others. I really think Japanese castles are amazing. There are no castles in New Zealand, nor are there castles I Bulgaria. I’ve dragged many of my friends along with me to see castles - my motto is if there’s a castle there, I’ll go! (laughs) I also like collecting the commemorative stamps there.

Sounds like fun! Is there anything that surprised you about Japan?

For me, most Hirodai classes begin at 10:30, which is completely different from New Zealand. I had 8:30 a.m. classes there, and since my house isn’t close by to the university, I would have to get up at 5 a.m… I’m not a morning person in the least, so Hirodai is the place for me (laughs). I was also surprised by the bicycles here. In New Zealand, I commuted to school by bus, so I thought it would be the same here, but everyone here rides bikes! I was really surprised by that. Plus, since I don’t have a great sense of balance, it took me awhile to get used to riding one. I’m okay now though (laughs).

I'm glad to hear it! Finally, do you have any advice for international students?

Believe in yourself and try and don’t be afraid to talk to people. You’ll make lots of friends that way. According to my experience, Japanese people are very friendly, be open to others and try lots of different things. At HU, not only can you learn Japanese, but you learn about life. There aren’t many chances like this in life, so you have to grab it! I feel like I’ve grown as a person.

Great advice! Well, this brings us to the end of our interview.  Thank you so much for talking to me today and best of luck with your research!

Study Abroad is... a lifetime opportunity. 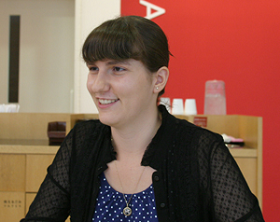 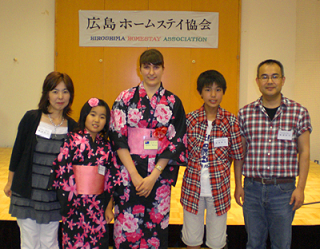 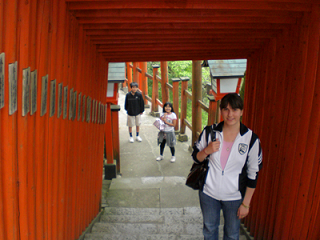 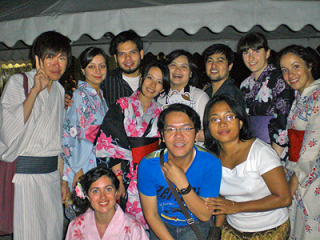 At the Yukata Festival with friends. 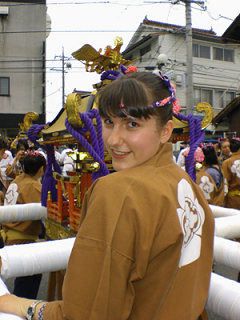