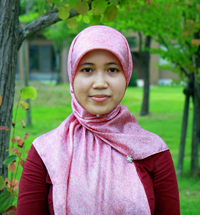 Thank you for allowing me to interview you today! First, what motivated you to study Japanese?

When I was wondering what to major in at my university, I thought that I wanted to do something that I’d never done before. It was then that Japanese language popped into my head. I had never studied it, so of course I was completely unfamiliar with it, so I thought I’d give it a try and made it my major. Can’t really say it’s much of a reason but…(laughs).

Well, first of all, there was only 1 native Japanese speaker. This is actually the norm for Indonesian universities. I studied conversation and writing, but we didn’t actually have many opportunities to speak Japanese. Now that I think about it, I could have just spoken Japanese to my classmates, but we were all pretty shy and didn’t have confidence in our speaking abilities…

Ah, I see. So why did you choose to enroll in HU?

Before I came to Japan, I worked in for a company in Jakarta, but I got the feeling that I was only working for my own sake. I mean, I was given a salary, but I felt like I could be doing more, like it wasn’t enough to just be working for my own sake. That’s when I considered continuing my education. I heard a lot about Hiroshima University from a classmate who studied abroad there, and it sounded like a great university, so I decided to enroll.

I also was interested in Hiroshima as a city which experienced the atomic bomb. I’m currently studying Japanese language education. For example, linguistic knowledge such as grammar and linguistics, as well as education and its theories. I’m working on comparative linguistic studies between Japanese and Indonesian in the field of Social Linguistics. 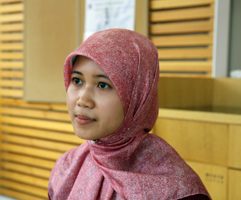 Is this your first time in Japan?

Nope. The Japanese Ministry of Education, Culture, Sports, Science and Technology offers a Japanese language and culture training program. They hold an exam for the program every year at the Indonesian Embassy and the students who pass go on training programs to Japanese universities. I came to Japan through the program and studied for a year at the Nara University of Education. While studying, I joined the Japanese Archery (kyudo) Club and learned many valuable lessons about Japanese traditional culture, the rules of etiquette, hierarchy, and Japanese social groups. It was an unforgettable year filled with laughter and tears, and it remains to this day my most treasured memory. I received my “sho-dan” rank while there, and even participated in a national competition (though I can’t say I’m very good!). It was such a great experience.

Sounds like it! Do they have those types of hierarchical relationships in Indonesia?

Not so much, no. Even if you join a club, once you get close to the other members, it doesn’t matter if they’re older or younger than you – you can say whatever you like. In Japan though, you have to watch what you say and what you do around older members, but it’s not like that in Indonesia. At first, I couldn’t really get used to the idea (laughs). I was like, “why do I have to be so careful??” In the club, they divided up tasks like cleaning, and all the really hard jobs like moving mats or wiping bows all went to the 1st year members. You don’t have to do it once you’re in your second year, but since I was only there for one year, I had a hard time swallowing that fact (laughs). It was tough at first, but by the end, I was really glad I joined, and it was really fun! Everyone was like family to me.

That's good to hear. So what drew you to the Kyudo Club?

I’m a Muslim, so I wear a jilbab, and I was a little worried that I might not be able to practice kyudo while wearing it, but everyone was very understanding and told me not to worry about it. But it did take some time before I was close to my peers, which might in part be to that fact that they’re not used to seeing Muslim dress. But once we became friends, everyone became like a little sister to me. Even after I returned home to Indonesia, I kept in contact with members and received many messages from them. Actually, one of the girls I knew is getting married this December, and I’ve been invited to attend. It’s lucky that I happened to be in Japan! 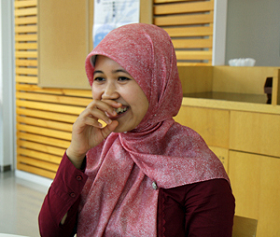 Looks like you’ve got a deep bond of friendship with your fellow club members! You mentioned that you were a Muslim – have there been any difficulties which you have encountered in Japan with regards to your faith?

We don’t eat pork or pork fat, and we don’t drink alcohol, so when I go shopping, checking the ingredients is a must, and if I go out to eat, I have to check with the staff that my meal is okay for me to eat. That got to be a little annoying (laughs), since I never had to worry about it in Indonesia. But I’m completely used to it now, plus Japanese food is really good, so I make sure to eat plenty!

You’re currently doing a comparative study on Japanese and Indonesian languages. What type of work do you see yourself doing in the future?

What’s most interesting about your current research?

Comparative research not only provides me with the chance to study Japanese, but also to study Indonesian. I’ve never really studied my native tongue like this before, so it’s my first time to look at Indonesian accents and voice. Also, when studying languages, you really have to start at zero, so it gives you the chance to study not just language itself, but the culture of the language as well.

Sounds like a lot of fun! Was there anything that surprised you about Saijo when you first arrived?

I was surprised at how quiet Saijo was. My classmate didn’t really emphasize  the fact that Saijo is in the countryside, and even still, I figured it was Japan, how countryside can it be? Turns out I was wrong (laughs). Honestly, it was a little inconvenient at first. As a Muslim, it was inconvenient since there are no mosques for prayer or during Ramadan, but I've really grown to love Saijo. Actually, I find that when I go to the city, it’s too noisy for me now. I went home to Indonesia for a month last year and got a big does of reverse culture shock at the noise, pollution, and litter in Indonesia. But on a positive note, I got to feel my own country and culture all over again, which made it pretty special.

Actually, there are many Indonesian students at Hiroshima University (the number sharply increased beginning last year) and to support the everyday lives of Indonesia students on campus, the Indonesian Student Association was created. In addition to helping each other, we also work together to hold various events (welcome/farewell parties, celebrating the founding of Indonesia, Islamic holy days, etc), raise money for children who can’t afford schooling in Indonesia, as well as holding a big cultural exchange event semi-annually. Last year, we held the event in August, and about 1,000 people attended, with Hiroshima University as one of the sponsors. 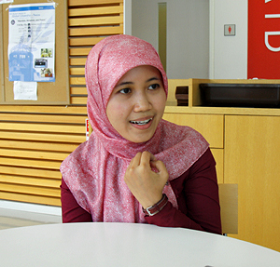 Sounds like your time studying abroad has been a great learning experience for you. Do you have any advice for international students?

I want them to enjoy their time here. Even if things get rough, there is always something that you can learn, so try and face difficulties positively.

Great advice! Thank you so much. Good luck with your studies and keep enjoying your time here!

Hiroshima University is... the best environment for studying!

Study Abroad is... the most fun challenge of your life! It's a rare opportunity for you to grow as a whole person. 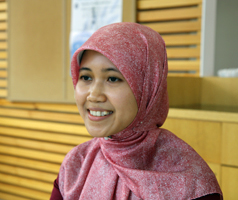 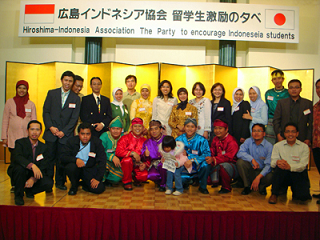 At the Hiroshima-Indonesia Association Party. 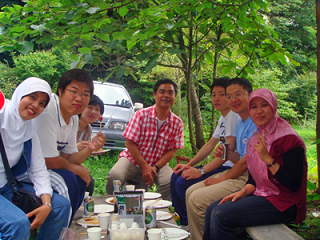 With classmates and professor at a barbeque. 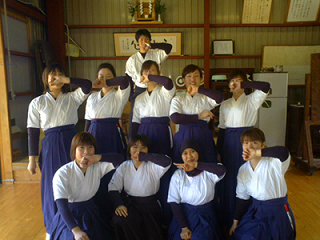 With her friends in the Kydo Club (Nara). 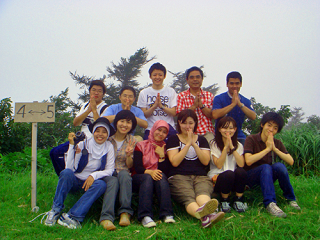 With classmates and professor.