I hope I can save many people’s lives! 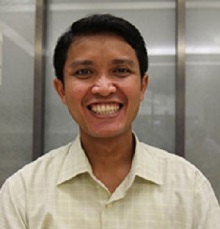 As the first interview of an exchange student on the Kasumi Campus, we are interviewing Mr. Bagus, a doctoral student from the Graduate School of Biomedical Science. Thank you for the interview today. You have lived in Hiroshima since you came to Japan?

Yes, however from October 2006 until March 2007 I was a research student, so I lived in Hiroshima University International House. After the Japanese language training course ended, I went back to my home country for a short time. In April 2007, I started research here (Kasumi-Campus) and I became a graduate student in October of that year. So, I’ve been here for almost four years.

I don’t think many foreigners study at the Faculty of Medicine or at graduate schools in Japan. Why did you decide to study in Japan?

In Indonesia, Japan has the image of being a nice country. Also some of my university teachers and friends went to Japan as international students. That’s why I have dreamt of studying in Japan ever since I became a university student. After graduation I worked for three years, but then I applied for a scholarship to the Japanese government, took a test and passed. In Indonesia, I heard that there is a famous cardiovascular surgeon at Hiroshima University. One of my seniors, a former student at the department of neurosurgery at Hiroshima University, introduced me to that professor, so I came here as an international student.

Did you already work as a doctor in Indonesia before you came to Japan?

Yes. I worked at a hospital. I also did some research and taught at the university level as a so-called “young assistant”.

Which university did you graduate from in Indonesia?

I assume that medical services and methods of treatment are similar, but there may be differences in establishments and facilities. Can you talk about this?

Basically they are the same, but you can say that the facilities and the medical equipment in Japan are on a higher level. Many hospitals in Indonesia still can’t afford to buy modern equipment. I’m lucky to be in Japan and to have the opportunity to study current medical practice. Although Indonesia has a large population, there are only few cardiovascular surgeons. After I return home I’ll make use of my experiences and everything that I learn here in Japan, and hope I can save many people’s lives. 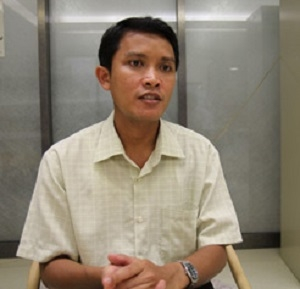 Did you notice any differences in areas like the medical care policy, law or the hospital systems?

Basically they are the same. The main difference in medical care policy is the existence of National Insurance in Japan. In Indonesia we haven’t introduced that sort of system yet, so it is very expensive to have an operation. In Japan, at a physician’s discretion, everybody is in the position to be able to undergo an operation, but in Indonesia we first must ask how much it costs. Of course, rich people can afford it. They buy private health insurance. Poor people are supported by the government, but the middle-class people are in trouble. I think that’s different in Japan.

Since you are a doctor, isn’t it necessary to also obtain a medical license in Japan?

When I first came to Japan I was not allowed to treat patients. Later I applied to the Ministry of Health, Labor and Welfare and received “Foreign Medical Practitioner Certificate of Permission of Advanced Clinical Training”. I’m still not allowed to treat patients alone, but I can take part in surgery together with doctors from Hiroshima University Hospital. I’m studying and practicing as an assistant.

What about Japanese patients? Can you communicate?

Many patients are very kind. At first they were surprised to see a foreign doctor, but after talking a little, many encouraged me by saying things like: “Your Japanese is very good” or “Good luck!” They also say: “Thanks in advance” or “Thank you very much for all you have done.” Before each surgery a doctor from Hiroshima University Hospital and I inform the patients about the operation details, and the doctor usually introduces me as: “This is a doctor from Indonesia who is here as an international student. He will be in charge of tomorrow’s surgery.” Doctors from Hiroshima University are kind, and I believe that I’m very lucky. It is easier to do Clinical Training in surgery because the method of operations is more or less the same all over the world. However, when we study at non-surgical department we are confronted with all these drug names in Chinese characters. It’s written here (on the license), that I’m not allowed to give prescriptions. I think that makes some difficulties if I were doing advanced clinical training in a non-surgical department. Although on the license it is written that the clinical training should be held in English, in reality it is difficult to rely on English only. There may be some emergency situations, such as heavy bleeding during an operation. Many Japanese doctors know English very well, but I can’t assist them during surgery without understanding Japanese. We have to response quickly and it is critical moment. That’s why I’m studying hard to learn Japanese.

Where and when did you start to learn Japanese?

Before I came to Japan, I studied for six months at the Japanese language department of a university in Indonesia, but when I first came to Japan I couldn’t speak any Japanese. Then I entered the Japanese Intensive Course at Hiroshima University. After the course, I continued to study at university. Every Saturday, I come to the Hiroshima City International House for Japanese lessons. There we read Japanese novel for an hour and a half. We check difficult Chinese characters and also prepare for the next lesson.

For the school of medicine, you need to remember not just daily conversation, but medical terms as well, correct?

Yes, that’s right. Well, I learn them little by little because Hiroshima University doctors speak in Japanese every day. Now, there are still a lot of words I don’t understand. My vocabulary is particularly limited. I write my thesis in English, but academic meetings where I am allowed to make a speech (in Japanese) are a good opportunity to increase my vocabulary step by step.

You’re able to perform surgery in Japanese, and you can speak in English and Indonesian too. Not only that, but you can even use the medical terminology. That’s impressive.

I use Japanese every day here. Maybe that’s why my Japanese is continuously improving. If I were studying in research lab where only English is spoken, maybe my Japanese wouldn’t be improving.

Mr. Bagus, do you speak Javanese in addition to Indonesian?

Yes, Javanese, that’s right. However, I can only speak a little bit of Javanese because I was born in Jakarta. Probably the same level as Japanese (laughs). It’s because Javanese is also difficult. It has honorifics similar to Japanese. Depending on your conversation partner, you have to use different words.

How about Semarang dialect?

The Semarang dialect is a kind of Javanese. People in Jogjakarta and other parts of Java can also understand it. It’s only slightly different. But Javanese can distinguish Semarang and Jogjakarta people by their dialect.

Do you understand Hiroshima dialect? 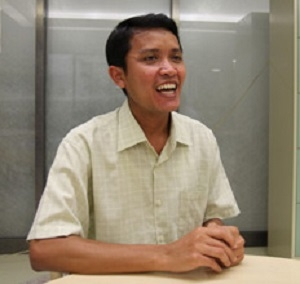 Your Japanese is really excellent. By the way, what kind of research are you doing now?

How can you avoid paralysis?

We inject a medicine into the clamped segment. This medicine helps to protect the spinal cord. Another way is via cooling. When we lower the temperature (down to 25 ℃), metabolism decreases. In simple terms, the spinal cord becomes more tolerance to ischemic condition. There are cells in the spinal cord, and they need blood to survive. Blood supplies them with energy and oxygen. There are two methods to keep them alive in case of ischemia: The best would be to supply the spinal cord with blood. That means to send blood from somewhere and to bring energy and oxygen to the cells. If we can’t do that, we have to decrease the metabolism of the cells itself. For example, men have to eat to live. But how can a man live without any food, for example, when he/she is fasting? You have to eat or drink, if possible. If you can’t do that, you need to reduce your activity. You have to avoid energy loss, be patient and keep calm to stay in good condition. It’s the same with the spinal cord. When the temperature is lowered to 25 ℃, the cells reduce their activity and calm down. It is like being in a refrigerator. When you put food in a fridge, you can keep it longer. That is the kind of research I’m doing now. 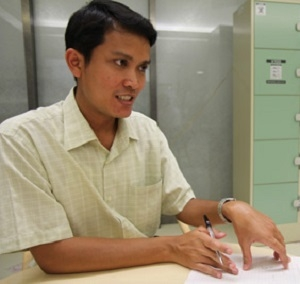 Oh, I see! That’s very interesting. Your explanation was easy to understand. I can imagine that you are very busy with your research. What do you do aside from your studies?

I take part in activities from the “Homestay Club”. Sometimes, I go to a party at the “Hiroshima International Homestay Club” or stay at a host family’s house for weekend or during the New Year to experience Japanese culture. I also like music. I play violin and I like computers very much. So much that I forget everything else around me. At first I lived in Hiroshima alone, but since last October, my wife also came to Hiroshima University as an international student and we live together, so I’m not lonely any more. My wife studies at the Department of Ophthalmology.

How many times have you gone on homestay?

Sometimes, we have a homestay for a weekend. Fortunately, my wife and I visit the same host family. We used to stay there over night. The family is very kind. When we go back to Indonesia, we always bring some traditional Indonesian souvenirs with us and try to introduce Indonesian culture to them. We also did a performance together with the Indonesian Students Association-Hiroshima and Japanese people in 2008. That’s cultural exchange!

Do you also go out to various places on weekends?

Yes, I go to nearby places, sometimes with friends. I also enjoy cherry-blossom viewing etc. In the summer, I went to see fireworks at Miyajima. Sometimes I go sightseeing, but never on weekdays. I also teach Indonesian to Japanese people. Once a week, I give lessons at the Community Center in Ushita.

Your private and working life seem very satisfying! Unfortunately, we are out of time to talk. Thank you very much for the interview. We enjoyed it very much! 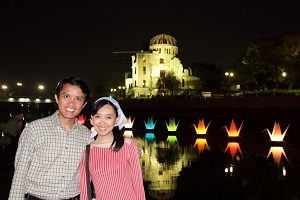 In front of the Atomic Bomb Dome with his wife 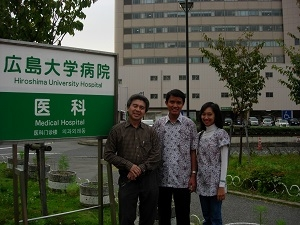 In front of Hiroshima University Hospital with the director of cardiac surgery in Indonesia and Mr. Bagus's wife 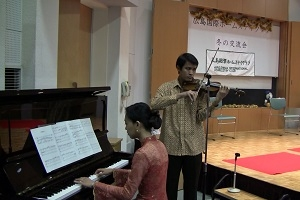 Performance at the “Hiroshima International Homestay Club” party with his wife