“I wish to become a bridge between Italy and Japan” 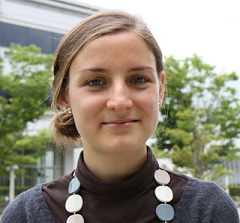 This is my first time to interview an exchange student from Italy. When did you come to Japan?

Last October (2010). My Japanese Language and Culture Study Program will end in September of this year (2011), but because I would like to go on to Graduate School, I want to take the entrance exam. I love Hiroshima and I won’t forget the year I spent here; however, previously I also had a strong curiosity about living in other regions of Japan, so decided to take the entrance examination for graduate school. If I pass, I’ll be able to enter in April of next year (2012). I’m not sure that I can make it, but I would like to go on to the Graduate School Literature Department. By majoring in literature, I wish to become a bridge between Italy and Japan, and I want to study anthropology and cultural exchange.

When I was a high school student, I just happened to hear a Japanese song on TV. It was a theme song for a Japanese cartoon. At the beginning I was not very interested in cartoons, but when heard that song, I became fascinated by Japanese and started to study on my own. I collected information on the internet and taught myself Hiragana and Katakana.

Yes, after high school I entered the University of Venice, East Asian Department. Then I started to study Japanese very actively. But I started with self-study. At first I thought that I would be unable to learn it alone. The difference between the Chinese (On) and the Japanese (Kun) reading in particular was difficult to understand, and I had nobody to explain it to me. But I really strongly wanted to visit Japan, and that brought out feelings that made me want to keep pushing ahead. At a bookstore I bought a textbook in Italian. At first it was very hard, but it was fun to learn something new every day. I was especially interested in the writing order and method of writing kanji. 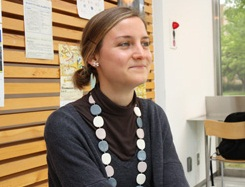 At university, did you study Japanese or Japanese culture?

I majored Japanese and took several courses about Japan in general, such as Japanese history, culture and economy.

Could you tell me about the city you lived in, Bologna?

You know, it’s really an old town. It is famous for its arches, called portico. I would like to show you a picture! The town center has plenty of these arches. They are the symbol of Bologna.

It’s a town with a long history, isn’t it?

Yes. It is an extremely old town. It was built in Roman times. The university itself was established in 1040 and has the oldest building in Europe. But if you study about Asia, Venice University is the best place in Italy, so I entered into the University of Venice.

What is the most interesting thing in Japan for you?

I like the Japanese people most. The first time I came to Japan, I had the feeling that everybody “loves me”. Everybody has been so nice to me, and I have never had a problem.

Why did you decide to come to Hiroshima University?

On my forth trip to Japan, I went to Kyushu. I thought that West Japan was nice, and calmer than the Kanto-region. After that, I visited Hiroshima in May and had the feeling that Hiroshima is a “place with a nice atmosphere.” When I applied for a scholarship from the Ministry of Education, Culture, Sports, Science and Technology, I received pamphlets from all of the universities in Japan. Among them, I especially liked the introduction of Hiroshima University, became interested and decided to come here. Also because I love okonomiyaki! (laughing) 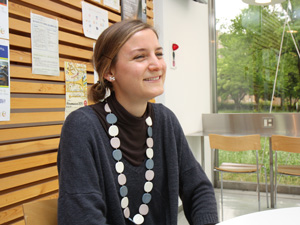 Didn’t you feel a little uncomfortable when you came to Saijo?

No, not really, although I was surprised that Hiroshima University was so far away from the city of Hiroshima. But the atmosphere of the campus is very good. Universities in Italy usually don’t have a campus. They are very old, and the school buildings are scattered around the city. The Department of Literature or the Department of Economics have their own buildings. That’s why it was my first time to feel the atmosphere of a campus, and I enjoyed it. Saijo is provincial, but there is a lot of greenery and it’s a comfortable place to live.

Is it very different from Bologna?

Yes, it’s completely different. In March (2011), my parents from Italy visited me for 3 weeks, and they said that this campus is really nice. They had never seen something like this in Italy, so it looked very new to them. They said that Japan is highly developed. The Italian universities have beautiful school buildings, but they are old and are suffering from the influences of the economic recession.

How did your parents react when you said that you would go to Japan to study?

You know, I have been in love with Japan since I was a high school student. My parents became increasingly familiar with that and saw me off wishing me “good luck”. When they came to Japan, they liked it here and they accepted that I was serious about staying in Japan.

What about the time that they came to Japan?

They also ate okonomiyaki. For 3 weeks, we travelled all over Japan. Just as my parents were visiting Japan, the Great East Japan Earthquake happened. At that time, we were in Miyajima and didn’t feel the shock of the earthquake. All the same, we cancelled our trip to Tokyo and went to Osaka and Kyoto instead. Of course, my parents said “Let’s go home together” after the earthquake, but for me the earthquake was one more reason to stay in Japan, as I wanted to fight together with the Japanese people. It’s because I really like Japan. I love Japan and I feel loved by Japan. I’m very happy to be here.

What do you do outside of class?

These days, I study in the library to prepare for my graduate school entrance examination. I also go to Hiroshima City with my friends for shopping or to teach Italian. Since I’m not a real teacher, I don’t explain the grammar, but practice conversation. It is like being taught Japanese by teaching Italian, I think.

Do you belong to any clubs at the university?

Yes, I started to attend the university tea ceremony school. It’s really nice. It’s difficult, but I hope to master it one day. Also, my teacher is great.

Do you do any sort of cooking?

Since I came here, I’ve wanted to eat Japanese dishes, and I’ve tried to prepare some. I like home cuisine like nikujaga and chikuzenni ,  and I prepare them by myself. I also cook it for Japanese friends and ask them: “How is it?”- And usually they answer: “There is still a long way to go.” I want to become a better Japanese cook. I also make pasta and other Italian dishes. Recently, I made tiramisu. I invited all my friends at the International House and we ate it together. Japanese tiramisu is completely different than the real thing.

Oh, I wanted to ask. What do you think about the Italian restaurants in Japan?

It’s not the same, you know. Pasta is O.K., but pizza is completely different. Italian pizzas are thin and crunchy. Japanese pizzas are small and soft.

Yes, but pizzas shouldn’t be soft.（laughing）. But one time, I visited an Italian Fair at a department store. There were many imported things and the gelato tasted Italian and was delicious.

Chiara, will you go back to Italy after Graduate School?

If possible, I want to work in Japan. I want to become a bridge between Italy and Japan.

For example, what kind of work do you want to do?

Well, I want to be a scholar. I’m also interested in working as a teacher. And, if possible, I’d like to translate. There are only a few Japanese writers known in Italy. Only Banana Yoshimoto or Haruki Murakami. But there are many other fascinating Japanese literary works and I would like to introduce them to the Italian people.

Is there a novel you want to introduce now?

To say the truth, I’m hooked on Osamu Dazai. I’m interested in the Japanese decadentisme. And Junichiro Tanizaki is also one of my favorites.

On the other hand, I think that Italian novels are almost unknown in Japan, aren’t they.

Yes, they are unknown. There are some novels I would like to introduce to Japan, but also our culture, especially cuisine and art. Hiroshima University does some research about Italian tourist sites, but it’s from the Japanese point of view. Since I’m Italian, I would like to introduce Italy from a different perspective. The Japanese usually have an unrealistic image of Italy.

I think you had a lot of courage to study overseas. Do you have any good advice for other people, who want to come to Japan for studying?

First, they should study Japanese hard. Then, they should be open-minded and ready to make many Japanese friends when they come to Japan. There are many international students who don’t communicate with Japanese and always stick together. What a waste! I think that it is important not to hesitate to make many Japanese friends, and to experience many aspects of the Japanese culture. Because, didn’t they make a point of coming to Japan?

Conversely, nowadays, Japanese students are said to be reluctant to go abroad. Do you have any advice to encourage them to study overseas?

In Japan, people are very kind and there is good public safety, but you can’t say that it is the same in foreign countries. There may be many inconveniencies and troubles.  I think that students should go abroad and communicate with different people, introducing their own countries’ culture and studying other countries’ culture so they can introduce it to their friends after coming back to Japan. I think that the most important thing in the world today is to understand each other’s culture. I believe that when you live in harmony with other people of the world、it’s definitely possible to have peace on earth.

In the International House, where I live, there are residents from many nations: From Pakistan, South Africa, Germany, Serbia etc. - from every part of the world. We are always chatting and having parties. It would be nice if the whole world were like this! I mean, all of these students who came from abroad, represent their countries, don’t they? Recently, one of the residents cooked Pakistani food for me, and it was very delicious. I have a lot of fun. 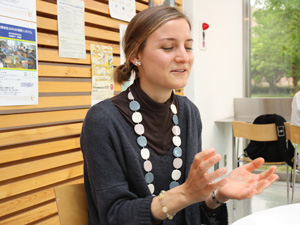 It is nice to experience many different cultures, isn’t it? It was nice talking to you. You can really see your love for Japan.

I really love Japan, and I think that I’ll love it even more in the future. Every day I meet new people. It’s great.

Thank you very much. I wish you good luck. 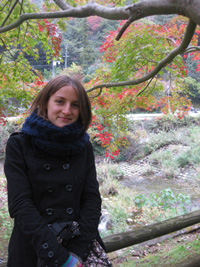 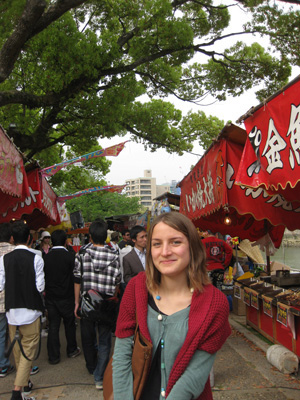 At the flower festival in Hiroshima City 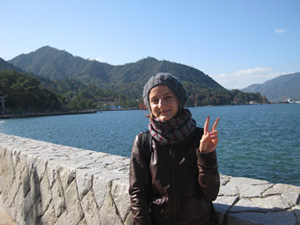 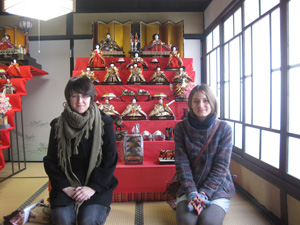 In Takehara, at an exposition (Doll’s Festival) 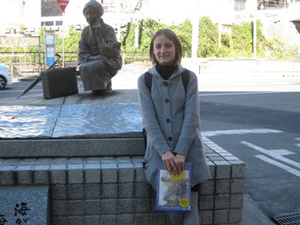 In Onomichi (in front of the statue of Fumiko Hayashi)