"You make yourself here" 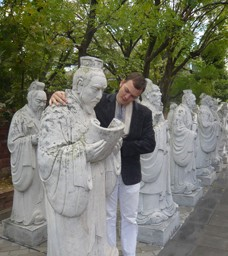 For our third edition of "Voices", I interviewed Alex, a D2 student of Japanese History with impressive language skills and a friendly personality. He is well-known for both at the Graduate School of Integrated Arts and Sciences, where he has spent 4 years researching his thesis under Professor Nunokawa. So what is life like for international researchers at HU? You're about to find out!

Thanks for coming out to the interview today. You're a PhD student, correct?

Yes, actually I was a PhD student in my home country; I was at Kyiv University, which is the biggest university in Ukraine, studying in the Faculty of History. When I was granted a MEXT (Ministry of Education, Culture, Sports, Science and Technology) scholarship, I came to study at Hiroshima.

It's a long story -- from a young age, my father told me different stories about history. He told me about the samurai when I was 6 years old, and that really left an impression on me, even now. At that time I was quite interested in history and the history of Japan, actually, and thanks to that began to study history and Japanese language.

How long have you been studying Japanese?

10 years probably. But it's still very bad (laughs). As well as my English! I was only studying Japanese at the undergraduate, by myself. I have no formal Japanese language education.

It was all self-taught? Wow! So why did you pick Hiroshima University?

I had some friends in Kyiv who were from Hiroshima who were engaged in music and they told me about the university. I also checked the university homepage about their library and the teachers who were in my field, so I decided to come here.

Did you look at any other Japanese universities?

Before you came to Japan, I'm sure you had some ideas about what it would be like -- but when you got to Japan, did you find it was different than you expected?

Actually, it's strange to say, but I had no expectations because originally, I didn't want to go to Japan -- or I should say, going to Japan wasn't my goal. I wanted to go to a place to study Japan, a place where I could read papers in Japanese (laughs) and to speak with Japanese scholars. So because the only place in the world where I can do that was Japan, I had no choice about it (laughs).

And what exactly is your topic of research?

Well, in Ukraine and a bit in Japan for two years when I first came here, I had been studying the topic of the origin of the Japanese people and how that origin is viewed by scholars today. It's kind of a controversial political topic...but the politics is not that subject I am really fond of (laughs). Thus I switched to a topic I like more, so for my PhD, I'm writing about the perception of Oda Nobunaga* in historiography of early modern Japan. So I have to read lots of historical documents in old Japanese.

I can't imagine! What drew you to Oda Nobunaga as a topic?

Well, he was probably the only leader in premodern Japan who was very close to Europe and the Western world. Since he supported different European missionaries and traders here, it was really of personal interest to me (as a European). And if I study this topic, it will also be interesting to people in Ukraine or in European countries which will help bridge between Japan and Europe. So I switched to this topic from controversial politics.

Yeah, sure. The first big difference is, for example, in many universities in Ukraine, you cannot choose your research topic freely. When you're a student, you are usually appointed a topic by staff of your faculty or the Ministry of Education--do this or do that--you can't choose the subjects you want to study. It's a very complicated and harsh system. So when I came to Japan, I was astonished by their way of doing things -- you make yourself here. You create a plan, do your research, and YOU are the only one responsible for it. In my home country, your academic advisor is more liable for your research than you are! But here it's the opposite.

What opportunities has studying here presented to you?

Well I'm no great scholar...yet (laughs) but I had the chance to go to some conferences, not as a presenter, but as a listener, and as this is my second year as a PhD student, I will have to present some papers soon. I also visited some European conference and workshops.

Well, I get up, have some breakfast, and then go to the library or my lab and research or write until about 8 or 9 at night. If I have free time, I do things with my friends, but it's really rare. My topic requires a lot of work and reading old Japanese so...I usually end up back home around 10 or 11 at night.

So your life right now revolves around research?

Yes. Especially the last 2 years. I translated an old Japanese chronicle, which I'm going to publish in Ukraine, and if it goes over well, I'm going to translate it into English and publish it in the US or England. The chronicle is called "Records of the Lord Nobunaga [Shinchoukouki]".

How long did it take to translate?

I'd be interested to read that actually. Have you written many papers since coming to Japan?

I haven't published anything yet, but probably in September I will publish some papers about the Christians and the results of my previous research on the origins of Japanese. I didn't have a chance to publish the results of my Masters degree, since I switched my topics so abruptly, but in September, I will have time to rework that research and publish them somewhere in Japan.

When you get your degree, what are your plans?

Well I want to be a research scholar, so I'll probably be a teacher somewhere in the future. For that purpose, I can stay in Japan and brush up on my Japanese and the level of understanding in my studies, or I might do some post-doc work in the US or somewhere else. Or I might go back the Ukraine and be a lecturer of Japanese Studies. But first I have to establish myself here as a research scholar before going back to make an impact on the development of Japanese Studies in Ukraine.

Do you have any advice for international students wanting to pursue research in Japan?

Building a network is important. I have people in Niigata, Tokyo, here that I keep in contact with and when I go to conferences and workshops in Europe, many professors advise me to publish papers and help me with my materials as well as provide support, so I feel like I'm not alone.

Which is all thanks to your network.

Yes, connections are quite important. And it's not very difficult to build a network either for foreigners because we're quite supported here.

What impact would you like your research to have?

When I was a child, I would read English papers about Japan and I found a lot of mistakes there, so my first goal is to improve the mistakes of preceding scholars. Secondly, not so many people can read ancient Japanese texts and there aren't many specialists who can read the old handwritten manuscripts, so I want to become one of those specialists and to translate those documents as my contribution to the field. I would also like to further develop the topic of European-Japanese relations in the 17th Century and make some comparative analysis between the two.

Well I wish you the best of luck with your research, and I look forward to seeing your theses published!

Thank you so much. 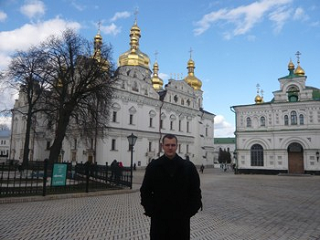 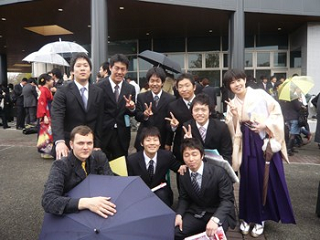 Graduation Ceremony with members of the Kendo Club 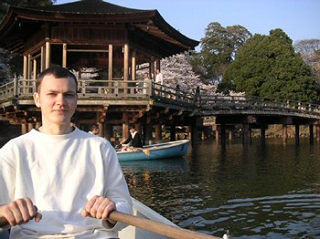 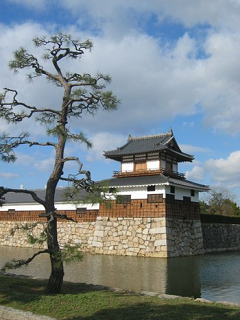 A favorite of Alex's.