No.4: I wanted to seek enlightenment from a professor I admired! 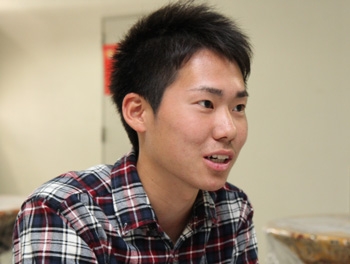 "HU Student Voices" gives those who would like to enter HU an insight into the perspectives of current HU students.In this, the fourth interview in this series, we talk to Yoshiaki Teramoto, a second-year student in the Faculty of Integrated Arts and Sciences.

Mr. Teramoto belongs to the Operation Tsunagari student volunteer group and participated in efforts to provide support to areas stricken by the Great East Japan Earthquake as a member of the 4th "Tsunagari Squad" that the group dispatched.Mr. Teramoto currently serves as the director of the group's Disaster Reconstruction Volunteer Division; we interviewed him about studying for the university entrance examination and his activities with Operation Tsunagari.

Why did you decide to take the entrance examination for Hiroshima University?

At the time, I wanted to become a high school teacher of English or social studies, and I was aiming for a different national university.During the summer vacation in my third year at high school, I went to that university's open day, but I didn't feel that it was a university that I wanted to go to, so I ended up back at square one.

After that, with some help from my parents, my homeroom teacher, and the careers guidance counselor, I restarted the process of selecting the university I wanted to go to.My teacher advised me, "You need to pick the university based on the professors!"That's when I encountered Professor Soho Machida of the Graduate School of Integrated Arts and Sciences at Hiroshima University.I was already interested in religion and I was impressed by the book that the Professor wrote about religion. It was like love at first sight!

That's the point at which I felt that the path I should take was clear and I decided "I'm going to the Faculty of Integrated Arts and Sciences at Hiroshima University."

Did you take the entrance examinations for any other universities?

When did you start to study for your entrance examination?

I started studying for the exam in earnest in around September of my third year at high school, after I decided to go to HU.

Did you attend a cram school or preparatory school, or use a private tutor?

An acquaintance of my mother's is a preparatory school teacher in Okayama, and it was this teacher who provided me with general advice about studying for entrance examinations, particularly in terms of guidance about writing short essays.It's quite a long way between Shimane and Okayama, so the teacher corrected my work by telephone and fax on numerous occasions.

I studied the other subjects alone, mainly using my high school class notes and anthologies of past questions, supplemented by advice from the teacher in Okayama.

Until Christmas or thereabouts, I went to bed around 11 at night, then got up at 3 in the morning and studied until 8.
Then, once classes finished, I studied from 4 in the afternoon until 11 at night, so I was studying while suffering a certain amount of sleep deprivation. 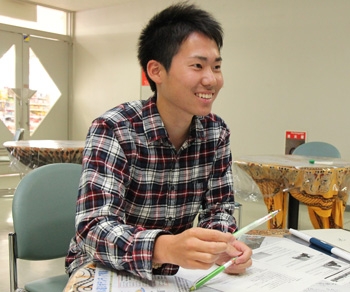 Mr. Teramoto talks about his experiences while studying for the entrance examination 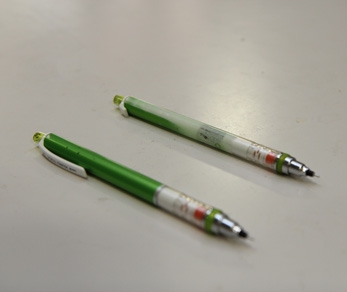 I wasn't able to study between Christmas and the National Center Test.Or rather, I stopped completely.I didn't study at all during that time.

And so, at last you took the National Center Test; how was it?

I hadn't studied at all immediately beforehand, so when I took the test, I thought "It's no good, I won't pass," but I actually got the best-ever score.
Immediately after the second day of the National Center Test, the teacher from Okayama was kind enough to come all the way to my home, and then I was able to do my best up until the time of the secondary examination.

How did you maintain your motivation while studying for the entrance examination?

The other thing I made it a rule to do while studying for the entrance examination was to meditate once in the morning and once in the evening.
I used a method of meditation that developed from Indian philosophy, and it was really good, because I was able to make my mind calmer and feel more deeply rested.

Once you actually got to HU, what struck you as being particularly good?

It was the strength of the links between students.I don't just mean between fellow classmates, but also between the junior students and the more senior ones.

How was it once you actually got to meet Professor Machida, who you admired so much?

The first time I took the Professor's class, immediately after I came to university, I was really moved and I felt that he had a very powerful aura.
As soon as the class finished, I rushed over to the Professor and spoke to him.

Since then, I've had tea with him and he's been kind enough to make time for me to speak to him at his office.

He was exactly as I'd imagined and I want to pursue research under his guidance.

―So, now tell us about Operation Tsunagari.

What kind of a group is Operation Tsunagari?

It was formed by volunteers - mainly from the Graduate School for International Development and Cooperation - immediately after the Great East Japan Earthquake struck on March 11 last year.The circle widened and now there are 74(*) members and supporters.

Its main activities consist of reconstruction support volunteer work in relation to the Great East Japan Earthquake, overseas volunteer work to provide poverty relief support and educational support for children in other countries, and community exchange volunteer work aimed at making the local community more cheerful and dynamic.Focusing on these three areas, we are developing "Operation Tsunagari" as a means of forging links between people.

The objective of Operation Tsunagari is to start from scratch and brainstorm ways of broadening its scope in order to bring cheer to people across the globe, and then to put these into practice.

(*) Figure correct at the time of the interview.

So far, the group has conducted reconstruction support activities four times in the disaster-stricken areas; can you tell us about the kinds of activities it has carried out?

We want to do things that only we as students can do, so our activities are focused on providing emotional support.

More specifically, we visit temporary housing facilities and help people who have been affected by the disaster, listening to what they have to say, and holding exchange sessions, as well as providing learning support for children and allowing them to let off steam by playing energetically with them.

I visited the disaster-stricken areas in March this year with the 4th "Tsunagari Squad" and we sought to offer emotional support to people there, as well as holding a gathering for local citizens and volunteers on March 11. 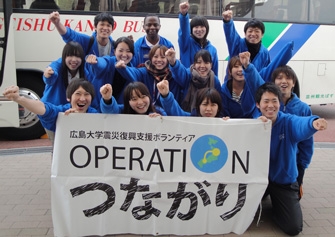 What did you feel when you actually went to the disaster-stricken areas as a member of the 4th "Tsunagari Squad"?

In addition, we hold seminars and exhibitions about the activities of the Tsunagari Squad, so I want to tell even more people about the things that we've actually seen and felt.In terms of opportunities for this, we've received a number of requests from elementary schools and groups to go and give presentations to them on this subject.

What activities does the group do, other than providing support for reconstruction?

From February to March this year, we dispatched our first "World Tsunagari Squad" to India, where we provided poverty relief support and educational support for children.Along with the Higashihiroshima City Social Welfare Council, we also engage in volunteer activities focused on interaction with local children.

Apart from your activities with Operation Tsunagari, how do you spend your student life?

In March this year, I went backpacking in India and spent two weeks there. The vibrant culture of Indian people fundamentally changed my values.
This summer, I'm planning to go to Tibet and back to India.
I'm really looking forward to it. 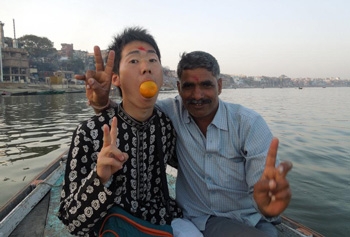 On the Ganges in Varanasi, India. With a local (left: Mr. Teramoto)

What activities do you have planned for the future?

Currently, I'm director of the Disaster Reconstruction Volunteer Division, and in August this year we plan to visit the disaster-stricken areas with the 5th "Tsunagari Squad."In addition, we're thinking about running a summer camp, so that we could invite children from Fukushima to Hiroshima and give them an opportunity to play outside to their hearts' content, as well as interacting with local children while visiting various tourist sites around the city of Hiroshima.

Finally, what message would you like to send to those who are thinking about applying to HU?

Be true to your own feelings. While you're studying for entrance examinations, if you feel "I want a day off today," listen to your feelings and take a break.It's a sign that you're approaching your limits.When you're studying, give it 120%, and when you're resting, give that 120% as well.If you do that, you're bound to succeed. 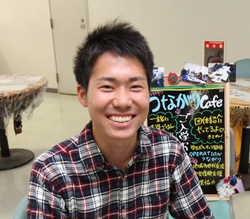